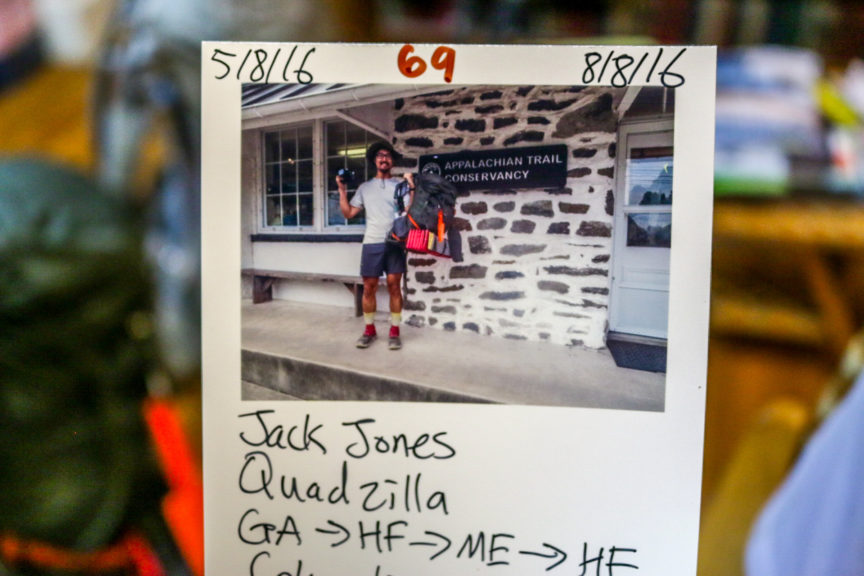 I’m writing to you from Harper’s Ferry, WV. Mile 1,022 on the Appalachian Trail. I expected a hiker town similar to Waynesboro – buffets, grocery stores within easy walking distance, and lots of hostels. Not so. Harper’s Ferry is a historic town. The homes here date mostly from the 1800s. The primary industry is tourism. Not bad, just not what I expected. I am disappointed at the lack of all you can eat buffets.

Stumpy and I stayed at the Mountain House Hostel last Saturday. It is a historic property built in 1840 that was abandoned and fell into disdisrepair. The current owners purchased the property in 2012 and are in the process of restoring the main house. 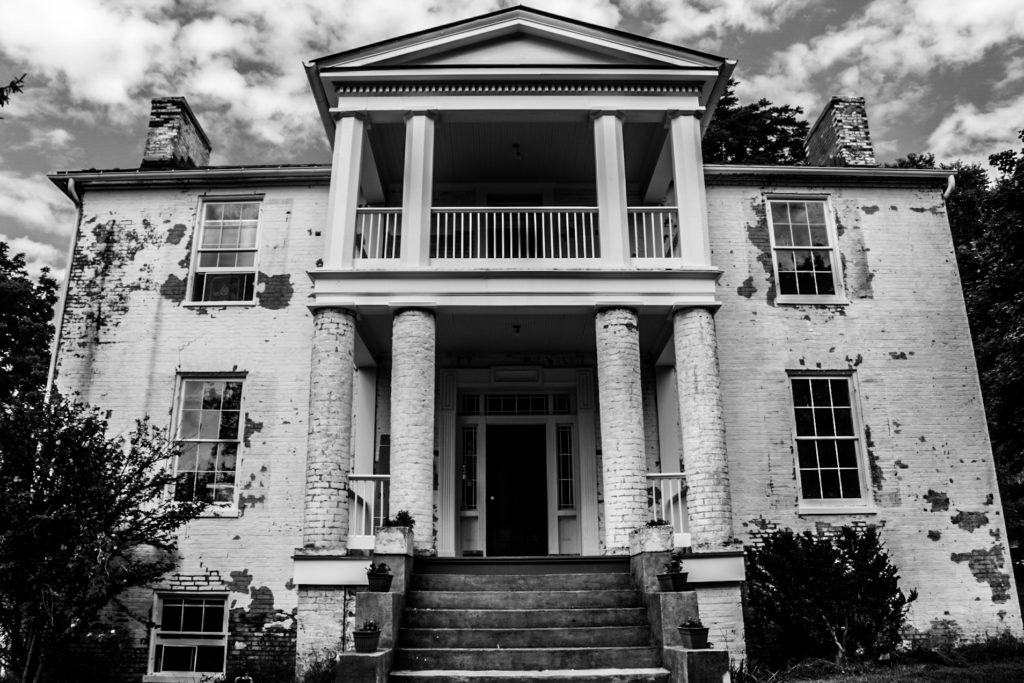 We spent a comfortable night in the cabin on the property and gorged on pizza. The next morning we headed back to the AT. We had only walked a short distance on the highway toward the trail when we heard an emphatic meowing and turned to see a tiny kitten bound out of the treeline.

We brought her back to the hostel and fed her a packet of tilapia. She was famished. Lisa(one of the hostel owners) wasn’t a cat person and understandability didn’t want to take ownership of a stray kitten. We decided to take the kitten to a shelter after Lisa was finished settling in a new guest and had given the contractors their instructions for the day.

In the meantime we watched the little kitty bound around the yard and try her hardest to get inside the house. During this time a group of women hikers slowly trickled to the hostel in twos and threes. 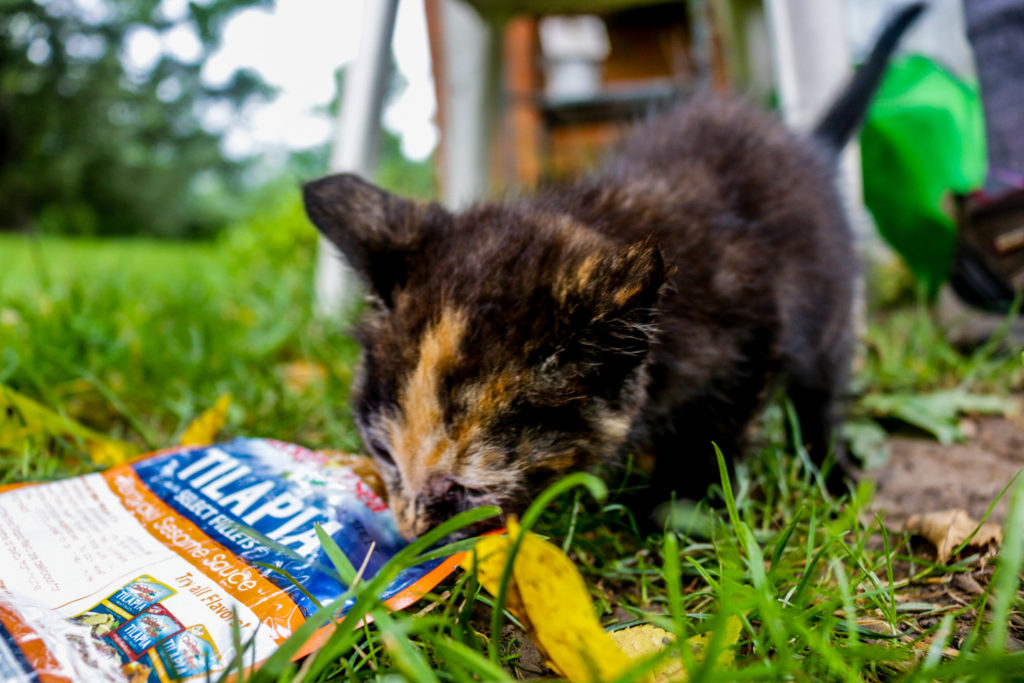 I’ve seen a total of four women hikers in the last 250 miles. So what are the chances that a group of eight would show up to the hostel while we were waiting to take a kitten to a shelter? One of the ladies immediately picked up the kitten and commented that she used to have a cat that looked just like the stray. After some half-hearted deliberation she decided that the cat could go home with her the next day when she finished her section hike.

Later that day we came across two Japanese hikers with a chocolate lab and poodle. Strange. You never see foreign hikers with animals. Turns out the dogs weren’ their animals. They had followed the Japanese men for a mile on the trail and the men were at a loss for what to do.

We didn’t know either. But the Japanese men just slowly walked away and the dogs stayed with us, so they were our problem now. I’ll admit, it was an impressively smooth escape.

Stumpy played fetch with the poodle while I called their owner. They lived nearby and were able to meet us at a road crossing. Luckily we didn’t have to back-track.

The dogs hiked with us to the intersection. The chocolate lab was kinda fat and you could tell he was ready to go home. The poodle kept running off to explore and was thoroughly enjoying herself. I think the poodle probably leads the chocolate lab on many adventures to places that they’re not supposed to go.

The owners met us at the road intersection and gave us a bottle of home made(and very heavy) honey. They have a bee farm near the AT. The dogs were named Reese and Darby.

So in one day we rescued three animals. Really quite a strange day. It lends credence to the idea that everything is connected and nothing is accidental. If we hadn’t left late we wouldn’t have found the cat. If Lisa wasn’t delayed by hikers and contractors we may have taken the kitten to the shelter before the group of women hikers arrived. If we hadn’t been delayed by finding the kitten a new home maybe those dogs would have just kept hiking with the Japanese men and been lost in the woods.

It all worked out perfectly. What are the chances? 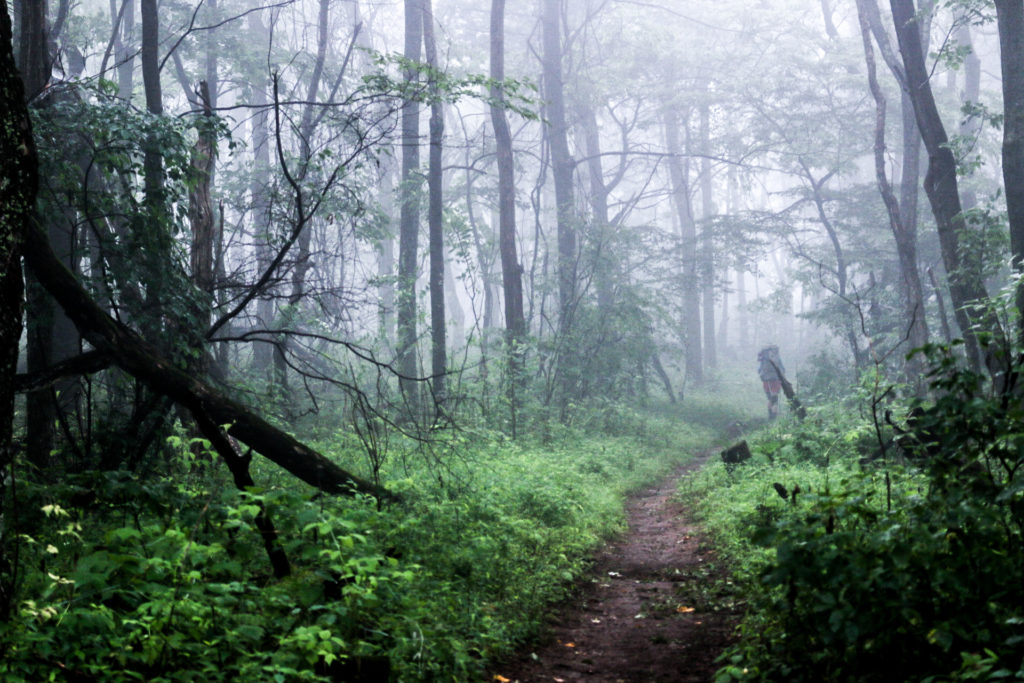 For Stumpy’s last night on the AT we stayed at the David Lesser Memorial Shelter. It’s a really nice shelter maintained by the Potomac Appalachian Trail Club. The shelter has a deck, adirondack chairs, a swing, and a large sleeping space.

There was nothing to indicate that this shelter had any special properties. We felt comfortable and at ease. Ate a massive spaghetti dinner and bedded down in the shelter that we had to ourselves. No one else had arrived, either to stay in the shelter or to camp.

The weirdness started when Stumpy saw a light underneath me and thought I had accidentally turned on my headlamp. Not an uncommon occurrence. Except that tonight my headlamp was already stowed in the tent pouch and off. We never located the source of the brief flash of light.

I was awoken multiple times through the night by what sounded like rocks banging together. I also felt like something big was prowling around the shelter. More of a gut feeling than anything specific.

Stumpy also had trouble sleeping and was plagued by nightmares all night. We compared notes in the morning. She didn’t hear any of the rock banging noises but also felt a sense of unease.

The woods can be eeiry at night but what we felt seemed to be different from the normal “dark woods are creepy” feeling. 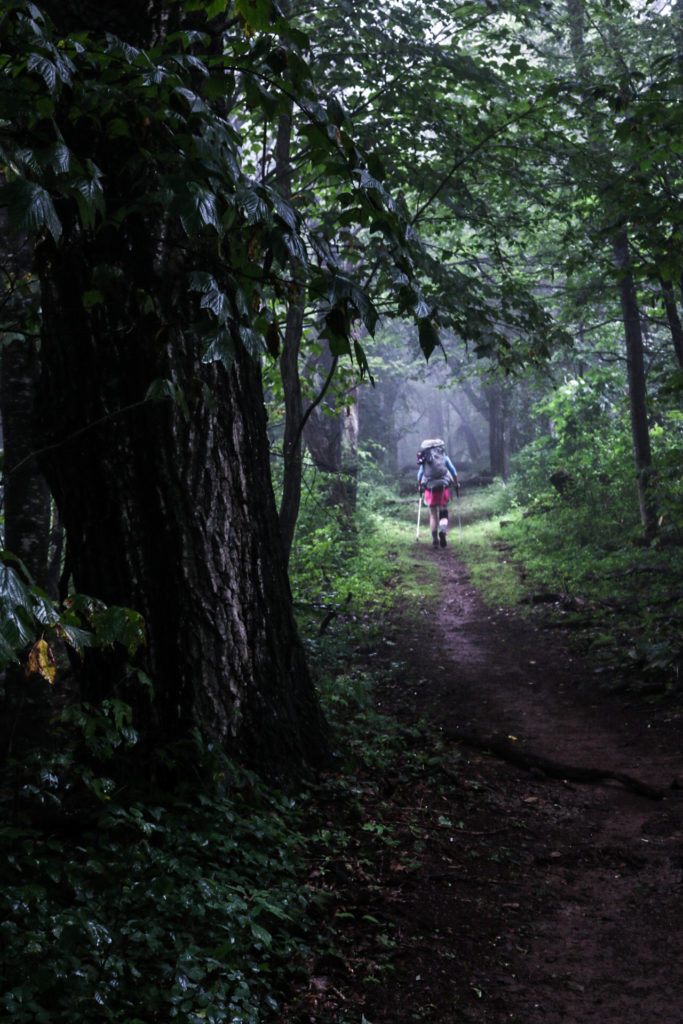 The woods can be really eeiry at times.

In the morning I walked down to get water from the spring. This spring is really far from the shelter, about a quarter of a mile. While I was gone Stumpy heard a howling from the direction of the spring. A sustained series of high pitched howls. She thought I was messing with her. It wasn’t me. I never heard anything during my trip to fetch water.

That was the end of the weirdness. We packed up and hiked to Harper’s Ferry without incident.

I wonder if that shelter resided in a “thin place.” Maybe a place where different dimensions meet. Or maybe there was a Sasquatch prowling around. Rock banging and howls are two classic signs that Sasquatch is in the area. Whatever it was it made for a memorable last night with Stumpy.

The Journey of a thousand miles 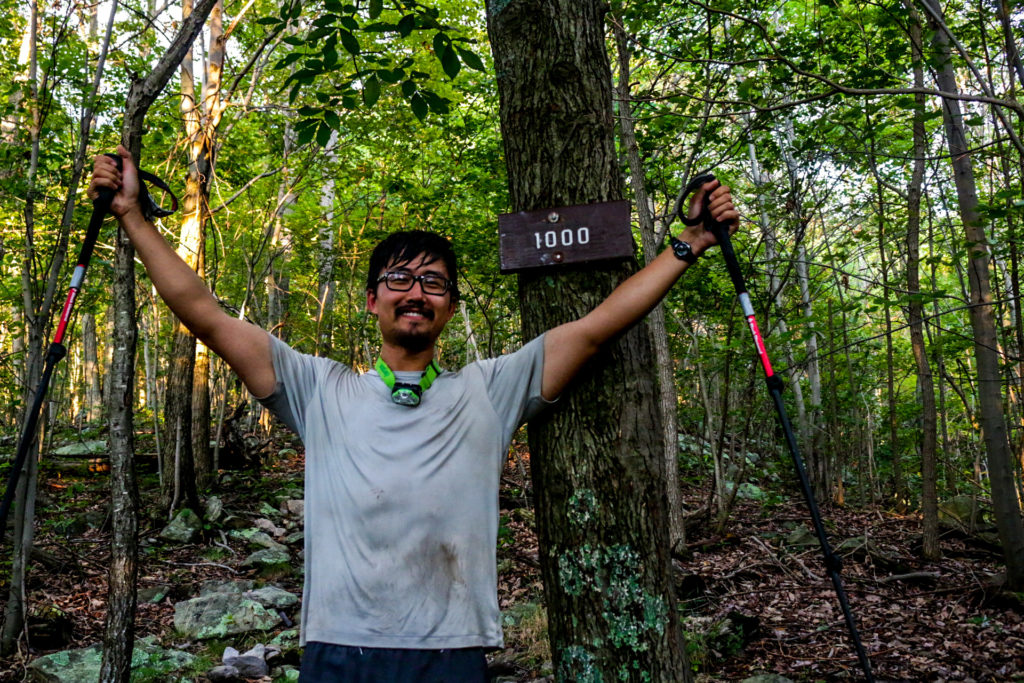 When I first learned about the AT I remember thinking “that would be a cool thing to do someday.” But the idea that I could actually complete a journey like that seemed remote and unrealistic.

When I started serious planning for the hike everything still seemed surreal. It was like I was planning for something that wouldn’t actually happen. As if my brain rejected the idea that I would actually hike 2,189 miles in the wilderness and was just humoring me with these plans.

I remember all the worry and fear in the beginning. Fear about rain. About cold. Storms. Poison ivy. Poisonous snakes. Where I would stay. Whether my body would hold up. If I’d be able to handle the mental stressors.

Really all the fear boiled down to the fear of the unknown. And as such they quickly dissipated once unknowns became knowns.

I’ve noticed that rainstorms are a big fear for new hikers that quickly disappears after they survive their first big storm. You get wet, your shoes get wet, you see a cool light show, hear some loud noises and hike on. You learn that it’s not so bad.

And that holds true for everything on the trail. The heat and humidity, while uncomfortable, aren’t so bad. The bugs, annoying as they are, are bearable. The bears are cute and non threatening. The rattlesnakes are easy to avoid and want to be left alone just as much as you do.

Really all of life is like this. Nothing is as bad as people make it out to be. This was a truism for me in the Army. Things sound terrible in stories but you’ll be fine.

Now the woods feel like home. When I walk on the trail I feel more at ease than I did in my apartment. There’s no fear. No worries. Just peace. 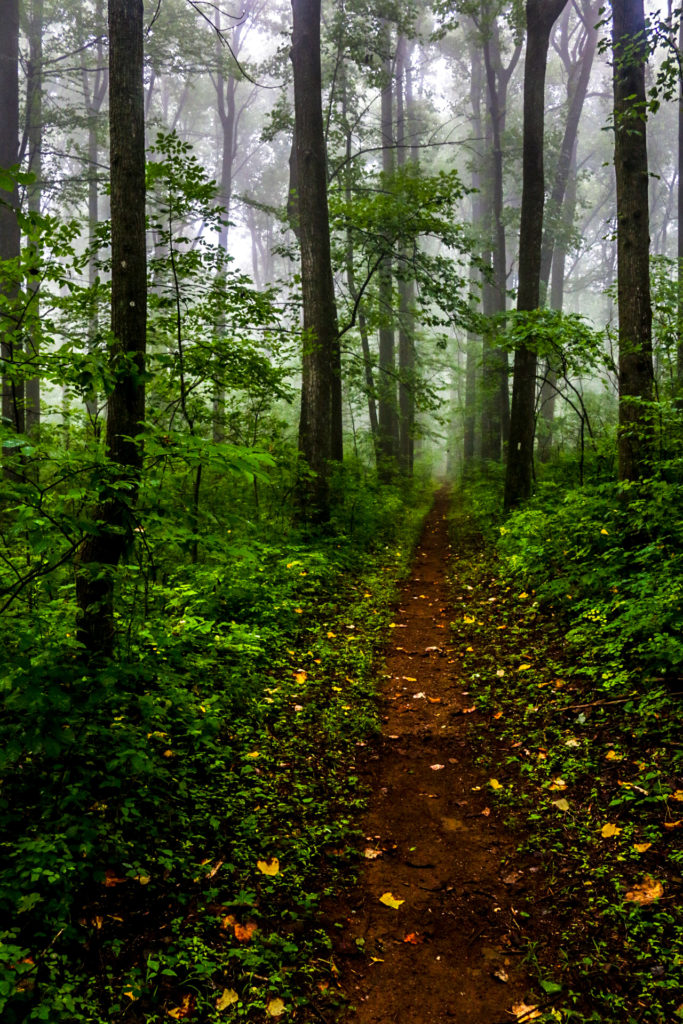 What three months ago felt like a surreal and quite possibly life threatening experience is now my normal. Climb three mountains and hike 25 miles without seeing another soul? Totally normal Tuesday!

In addition to making me less fearful the trail has helped me become more comfortable to be me. The longer I hike the less I feel a need to please others. I feel more comfortable saying no and just doing what I want, without fear of how others may perceive me.

I think this is why solo travel is so appealing for me. It allows me to just be. I don’t have any expectations to live up to. No one has preconceived notions of who I am and so I have no facade to maintain. I am me.

It’s liberating. To be free from all social and conventional expectations. It reminds me of Buddhist writings about the freedom that arises when you realize everything around you is Maya, or illusion. The social conventions that bind us so strongly are just that – illusion. You can eat dinner, by yourself, reeking of sweat after a week in the woods. It’s only the illusion of social convention that says you shouldn’t. But you can and nothing bad happens if you do.

Once this realization is made your world opens. Instead of doing what you “should” do and “have” to do, you just do what you WANT to do.

After three months of living in the woods it becomes abundantly clear that to live a “normal” life means having many decisions made for you. There are so many things we “have” and “must” do. It’s liberating to step back and truly choose every aspect of your life.

I highly recommend everyone to take time and go off in the woods alone. You’ll be able to come back and live a more conscious life. To see the friviolius and unimportant as just that. To value what is truly valuable. To decide for yourself.

Thanks for reading. I’ll travel by train up to Maine on Thursday and make my way to Katadhin and head south back to Harper’s Ferry.