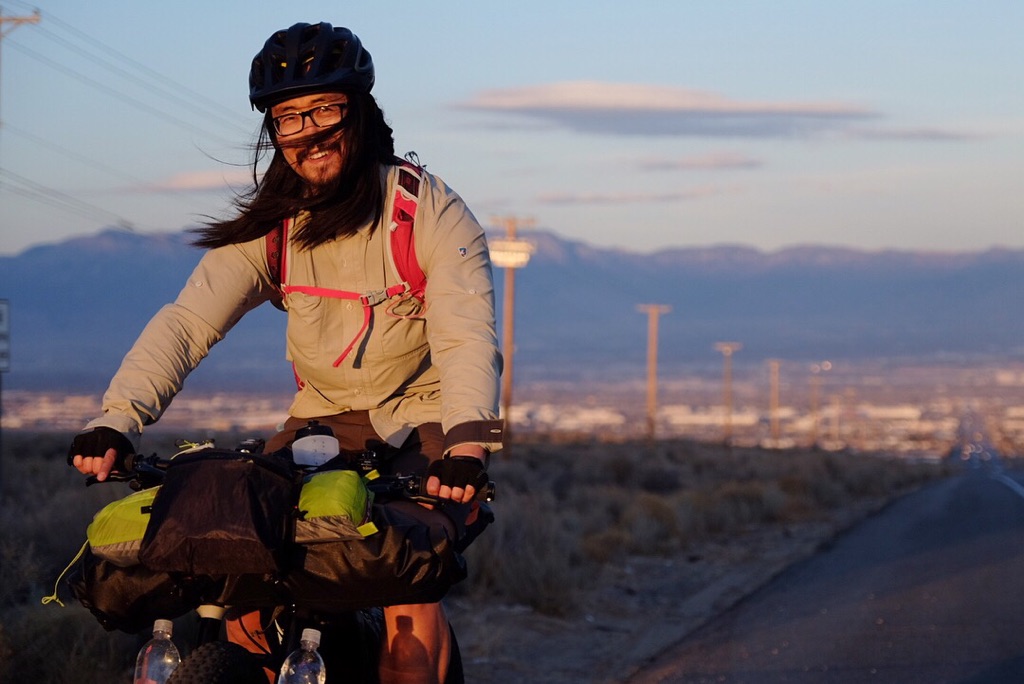 I’m writing from Scottsdale, AZ. I’m staying with Gerald and his wife Kat. I’ve known Gerald since I was a little kid and we roomed together in College.

I know, I’m supposed to be in New Mexico. So – how did we end up in Scottsdale?

Jillian dropped me off at the Amtrak in Kansas City on the night of the 10th. I slept on the train that night(had a surprisingly restful night of sleep) and arrived in Albequerque, NM at 5pm on the 11th.

The trip was uneventful. I met a full blooded Navajo man my age named Mark on the viewing car. He was traveling back to his home on the Navajo reservation an hour south of Albequerque. He told me that he had been traveling for the last five years working jobs all across the country and that he hadn’t seen his children for that entire time.

Mark’s stories were fascinating. He has 10 siblings, 20+ aunts and uncles and over 50 cousins. When he was 13 he went on a rite of passage where he spent three weeks alone in the wilderness of New Mexico. During that time all he had with him was a small Swiss Army Knife. He survived off the land for those three weeks. After he returned home he was presented with his new wife. At 13. Not courted, or dated, or asked for the hand of marriage. He was GIVEN his new wife after becoming a man during his rite of passage. I think he had two kids by the time he was 15. I didn’t know this stuff still happened in the modern age.

We took a brief interlude where he bought another Jack and Coke and then he started telling me stories of the Skinwalker. Skinwalkers are one of the most feared beings for Navajo. Skinwalkers are medicine men who have turned evil. Kind of like Sith Lords. To become a Skinwalker you must murder a member of your own family in a sacrificial ritual. Gruesome stuff.

Mark warned me repeatedly to be wary of Skinwalkers during our time on the reservations and in the wilds. He was incredibly ernest and sincere in the way that only a drunk man can be. He was not making up stories. He believed that the Skinwalkers were out there and that they posed a real danger to me on my journey.

When Mark was young he saw one. He was out hunting with his cousins and he saw what appeared to be a humanoid being walk behind a tree in the distance and from the other side of the tree emerged a Jackrabbit that was two feet tall, had the tail of a horse, and the feet of a man.

Mark warned me never to follow a Skinwalker. To guard my mind against dangerous thoughts of self-harm or harming others, because Skinwalkers can influence our minds. And that if I did see one that I should burn Cedar wood and rub the ash on myself for protection. And to never be in the wilds alone.

Skinwalkers are shapeshifters and can be distinguished as a Skinwalker while in animal form because the animal will always have some part that isn’t right. Human feet, or wrong eyes, or strange behavior. He told me to trust my gut and avoid places that didn’t feel right.

All in all good advice. But anyway I arrived in Albequerque and met Ryan “Kodak” Brown, my travel companion for the next 6-8 months. He gave me a ride to Andy’s house.

Ryan had arrived two days before I did and met Andy on the website “Warmshowers”. It’s like Couchsurfing.com but for long-distance bicyclists.

I stayed for two days in Albequerque getting my bike packed and everything set up and then we headed out on the road! 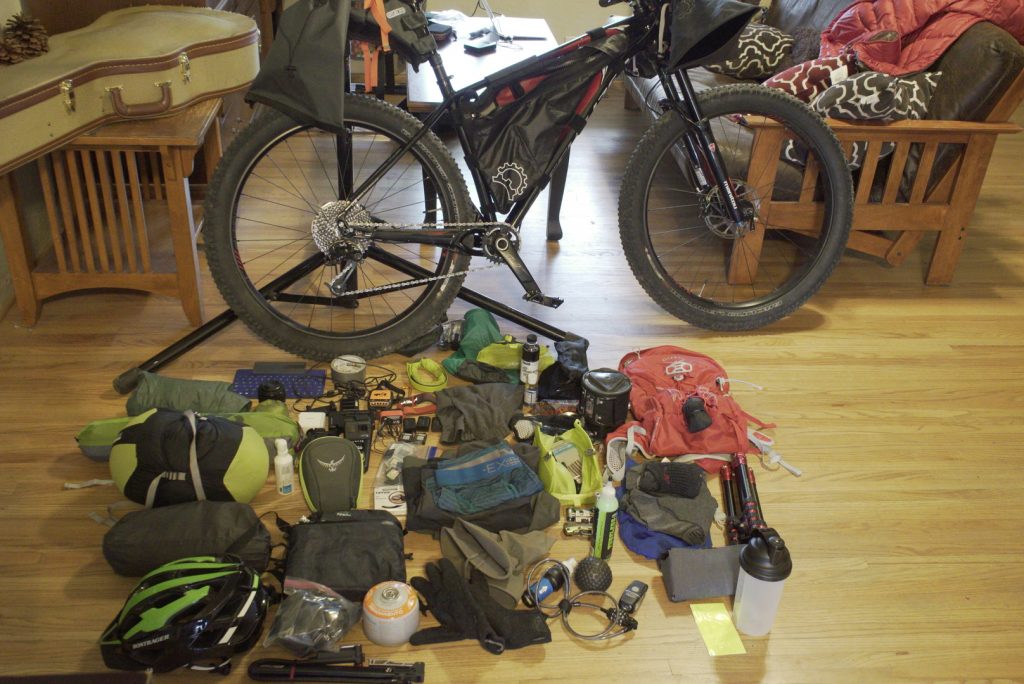 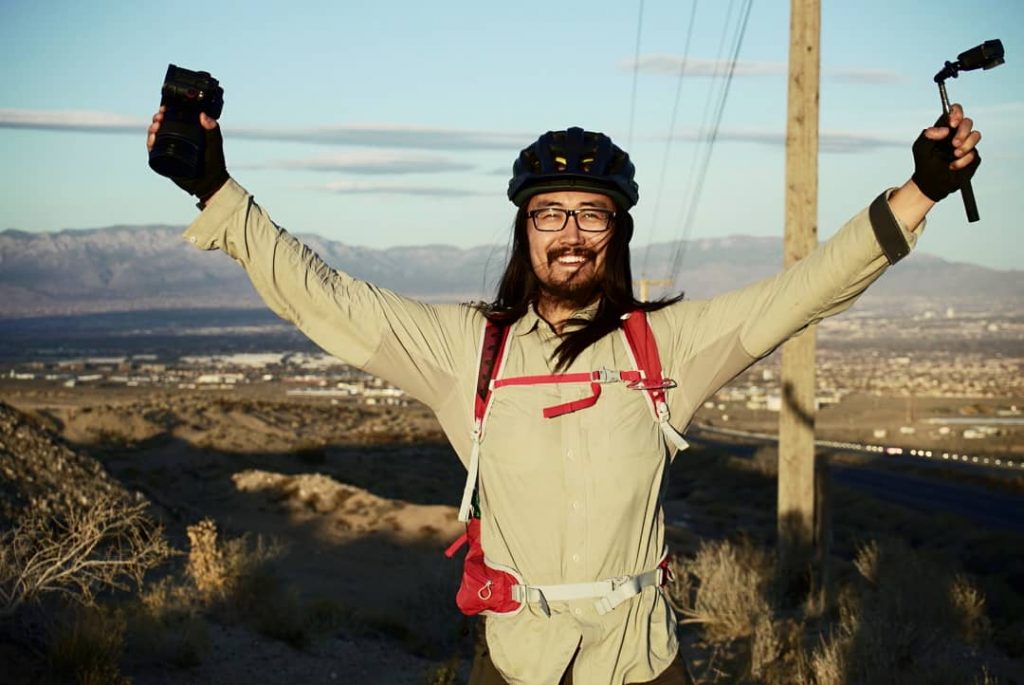 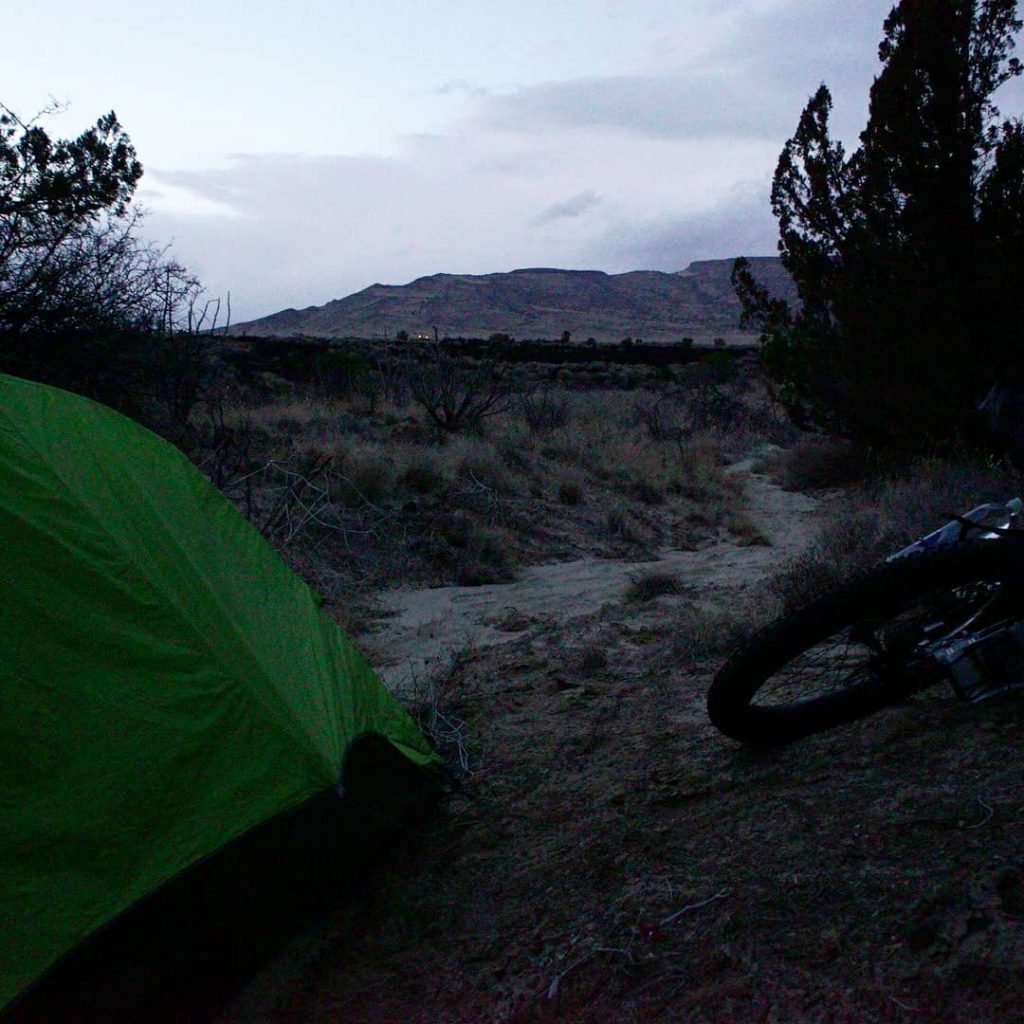 Our camp in the small wash on the side of the Great Divide Mountain Bike trail.

The winds that day really were absurd. I’m not exaggerating when I say we had to pedal going downhill. Otherwise the winds would stop you dead in your tracks. 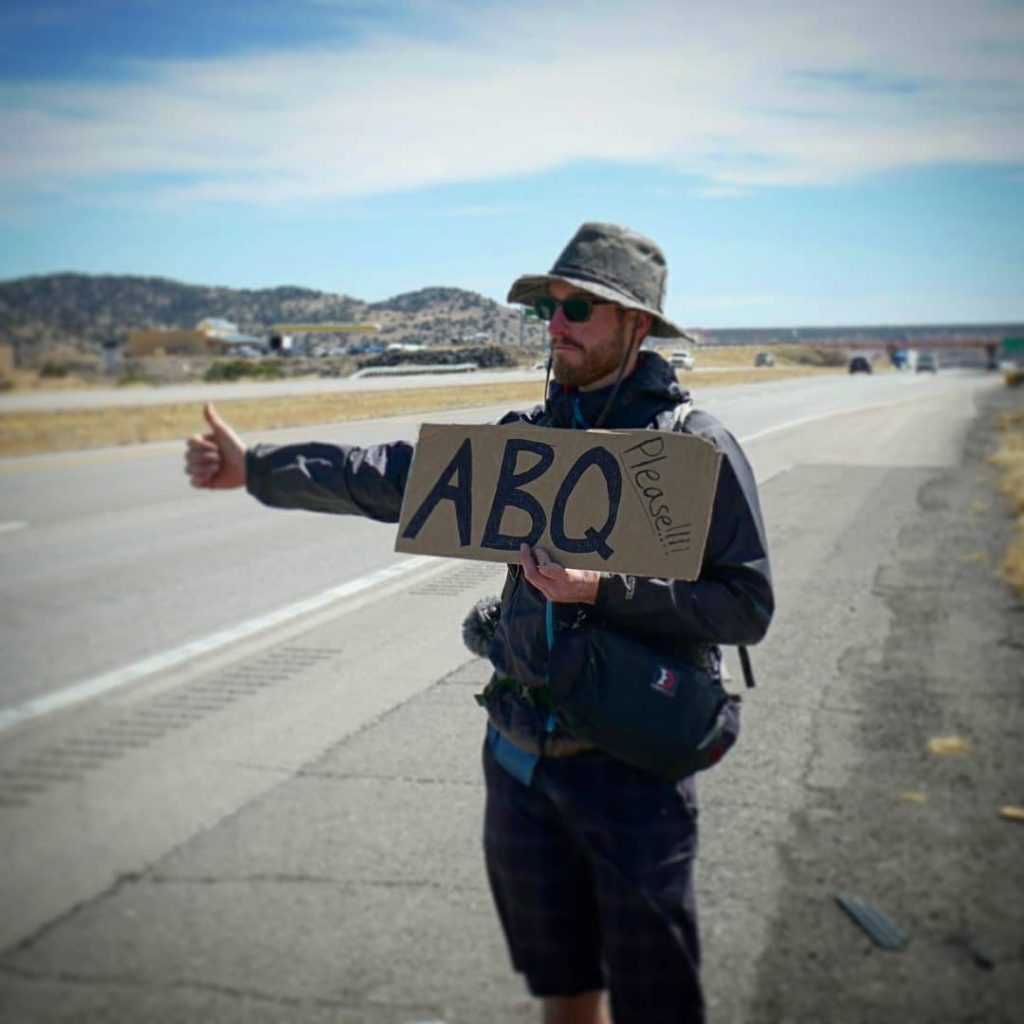 Lots of hitchiking in the last two days. 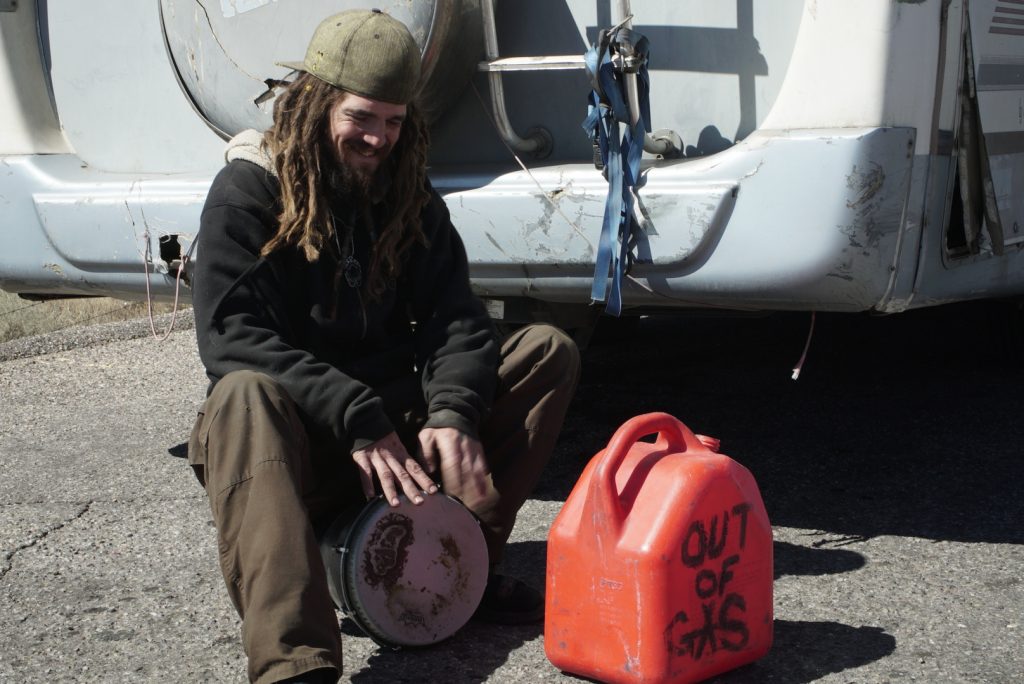 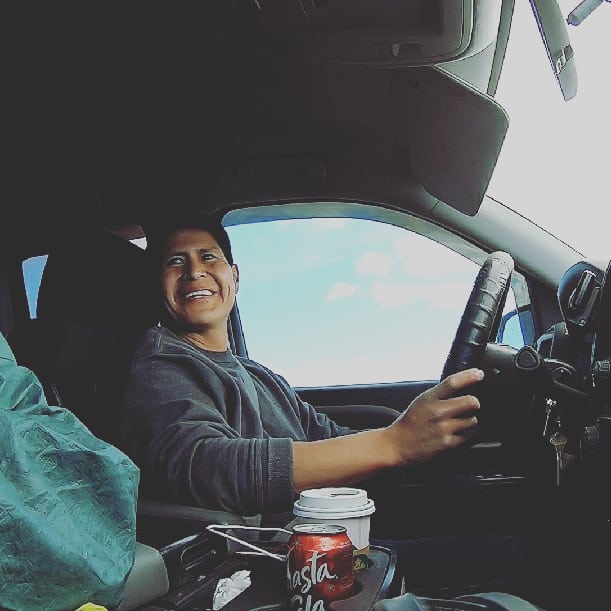 Clyde, the supervisor of the Hot Shots crew who gave us a ride to the Great Divide.

So now you’re mostly caught up. Today we returned the rental, bought some groceries, and went to a local bike shop. I had my bike adjusted and increased the height of my handlebars by about an inch. Then we rode in a nearby mountain bike park for about an hour for a small taste of what the Arizona Trail will be like. It’s going to be hard! But also really fun. Arizona is BEAUTIFUL. I’m looking forward to getting on the trail finally.

My knee feels much better today already and only gave me some slight pain on the ride. It’s not stiff and sore like it was the two previous days.

I’ll play it by ear but we’re shooting to be on the AZT by next weekend. It all depends on how the knee holds up to the conditioning rides this week. Kat made Paella for dinner and it was great. She thought we couldn’t eat it all. We proved her wrong.

Thanks for reading. I’m having a blast! This already feels like more of an adventure than the Appalachian Trail. This trip feels more unknown, more raw, and more uncertain. I love it!