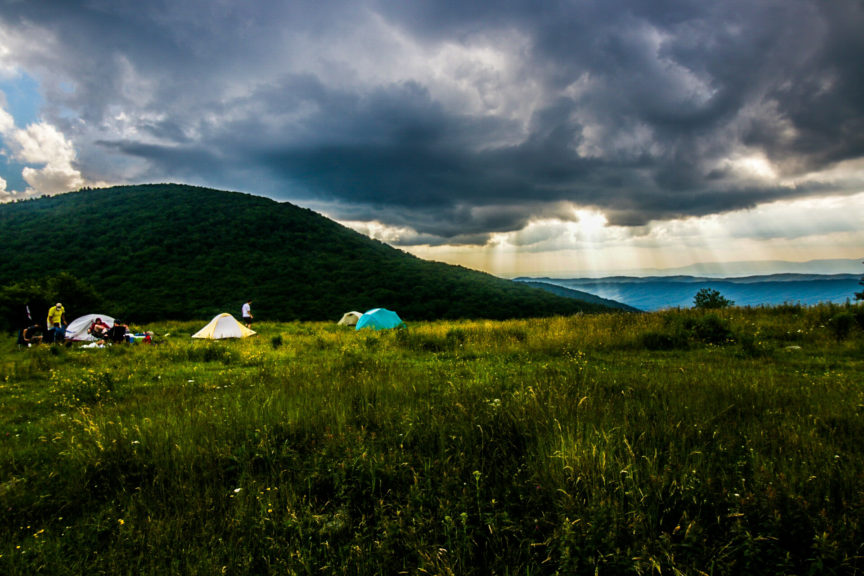 I’m writing to you from the Angel’s Rest hostel in Pearisburg, VA. This is mile 635 on the trail.

Angel’s Rest is a new hostel that opened this season. It isn’t listed in any of the guidebooks. A southbound(SOBO) hiker named Han SOBO told us it was better than the Motor Lodge(which housed live in meth addicts apparently). His vague directions to the hostel was, “it’s behind the Food Lion.”

Armed with that info I came into town, found the Food Lion, and wandered around behind it. I walked through a small residential neighborhood. I saw lots of jacked up pickup trucks and Confederate flags but nothing that looked like a hostel. After wandering through several neighborhoods and catching strange looks I was starting to wonder whether I would ever find this hostel. And like magic a van full of smelly hikers materialized at the stop sign in front of me. It was the hostel shuttle.

This experience was interesting in two ways. One – walking into town I never doubted that I would find the hostel, even though “behind the food lion” is possibly the worst set of directions ever given. Two – the van materialized after I had taken action despite not having the full picture. Another concrete example that if you commit to a goal in your mind and step off into the unknown that help will come when you need it. I feel like the trail has been repeatedly teaching me this lesson.

My last update was from Damascus. Since then I’ve hiked through the Grayson Highlands, took a break in Marion, and walked another 100 miles into Pearisburg. 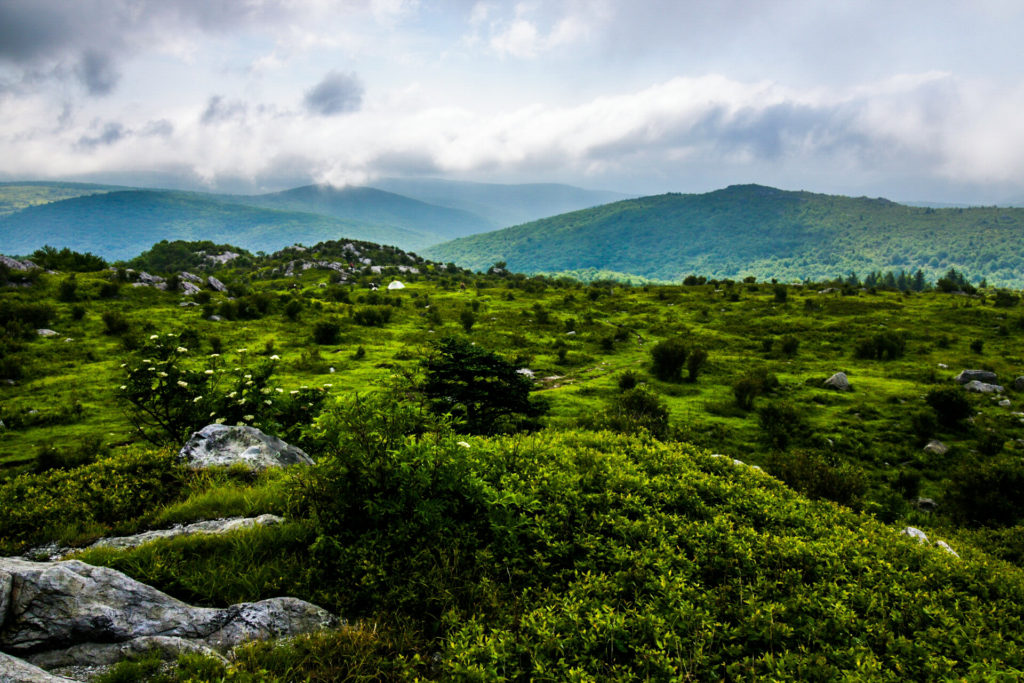 Grayson Highlands state park sits about 20 miles past Damascus and is famous for its wild pony residents and Scottish esque landscapes. 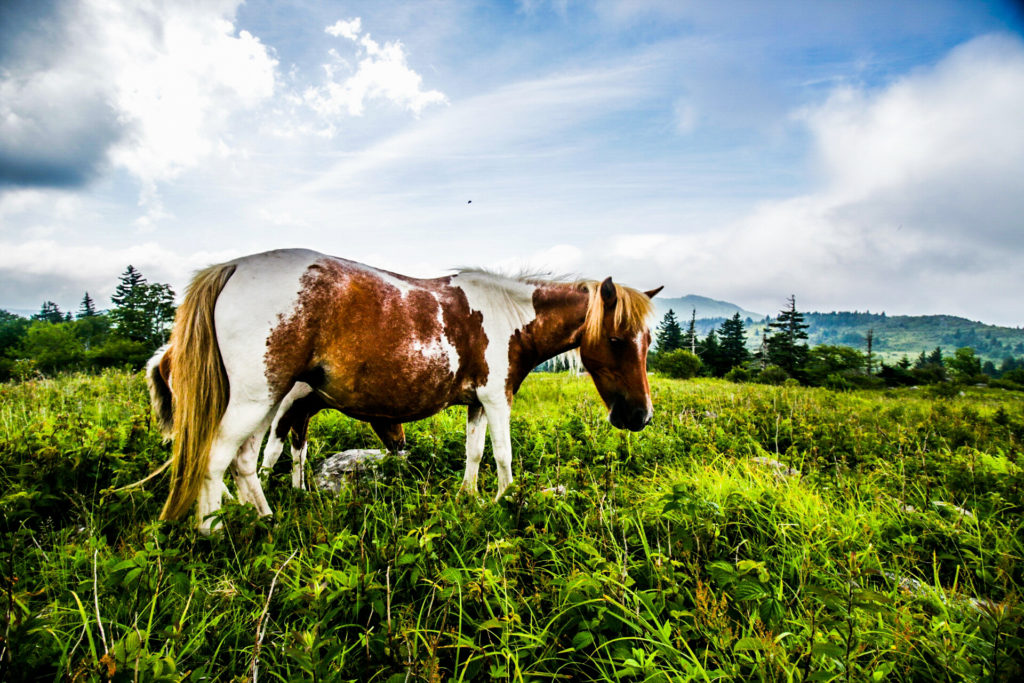 I timed my hike so that I’d have a full day in the highlands. Arriving off of Mt. Rogers in the morning I hiked into a misty magical land. Thick fog and clouds had rolled in at sunset the night before and still clung to the landscape. As I hiked deeper into GHSP the sun started to burn away the fog and that’s when I saw my first wild ponies.

It was surreal. The soft lighting of partially obscured sun along with lingering patches of fog infused the whole scene with mythic quality. It wasn’t difficult to imagine dragons and knights riding through this land. 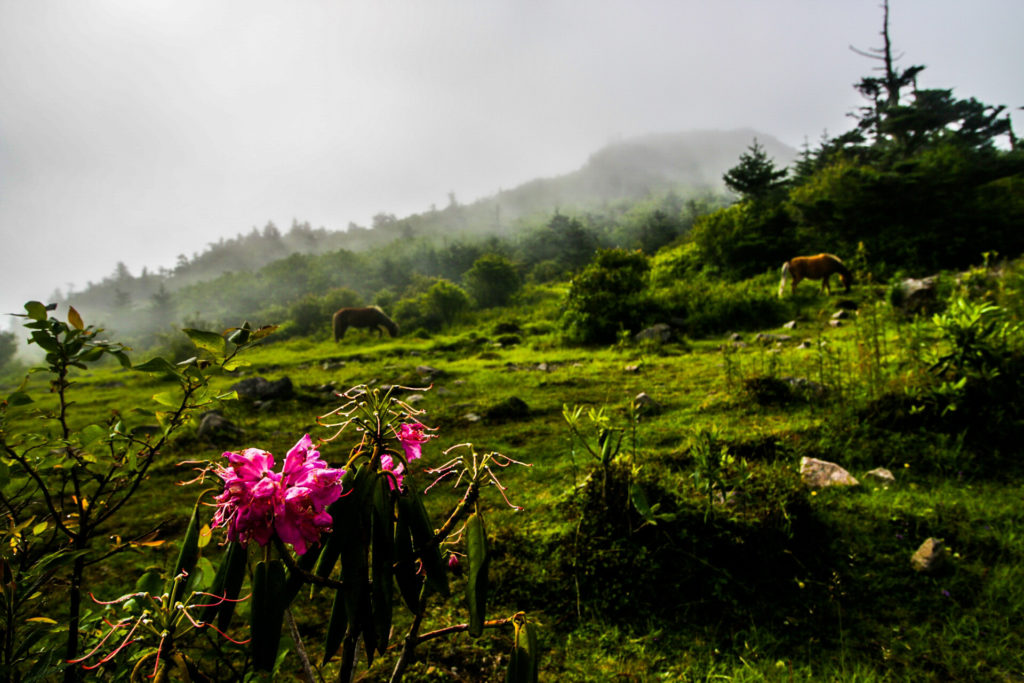 I think I filled up an entire SD card with photos in a 10 mile stretch that day. There was a new vista around each bend and beautiful photogenic ponies too.

The Grayson Highlands is a place that is well worth visiting.

I finally saw my first bears! It was later in the day and I heard a rustling in the woods. Usually I ignore rustling. There’s always rustling. Maybe that’s why I haven’t seen a bear until now. But this time I stopped to investigate and saw a small black bear glancing at me warily, about 100 meters away.

We looked at each other for a few seconds. I pulled out my camera, and he scurried deeper into the woods. Then I heard more rustling and saw a baby bear come down from a tree. He ambled away downhill and climbed a bigger tree. He was a good climber, making it about 30ft in less than a minute.

I don’t know where mama bear was. The first bear looked to be an adolescent but it could have been a small female. However I feel like a mama bear would have been more aggressive toward me while her cub was treed.

I’ve seen three rattle snakes, two bears, lots of deer, birds, and rodents. The only creature left is a Sasquatch. I have collected quite a few squatch stories and I’ll write about them in a future post.

All the hikers converged on Pearisburg for the 4th. I’d been hiking with a guy named Hardback and we were the only people at shelters for three nights in a row. Last Friday I walked for 7 hours without seeing another soul. So arriving to the hostel and seeing familiar faces was nice.

There were about 20 hikers here for the fourth. Fire, Farley(a black lab), Beehive, and November, who I’d met all the way back in Franklin(510 miles ago). Cha-cha and Ducky who I’d met in Erwin. And Library, Raven, McQueen, Newman, Captain Planet, Rainbow Mama, Coyote, Apple and her father, Hungry caterpillar, Bean, Coupon, Shatterproof, and Space Panda. 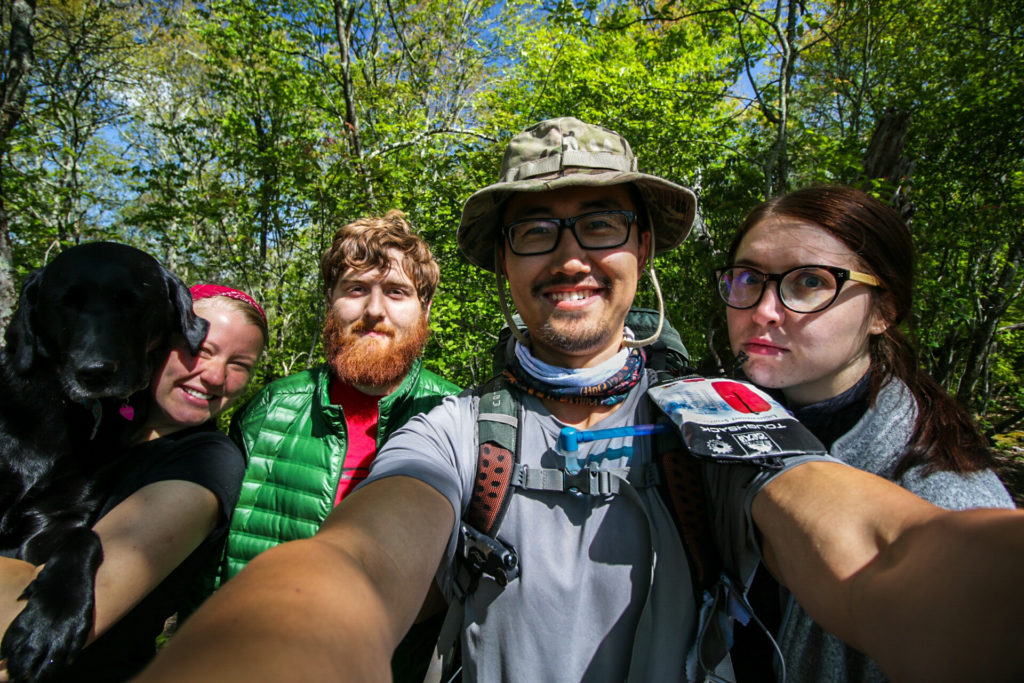 Melanie and Farley are on the far left. 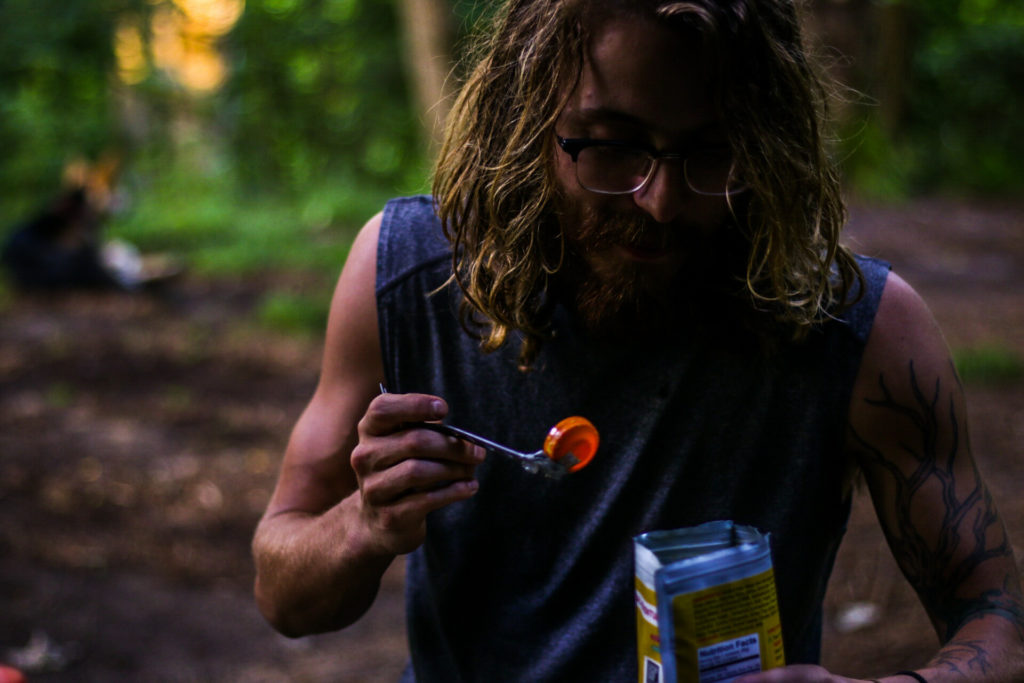 We cooked a massive feast. Brats, burgers, grilled chicken, massive bowls of Mac and cheese, salad, stir fry, and watermelon. And of course, lots of beer. 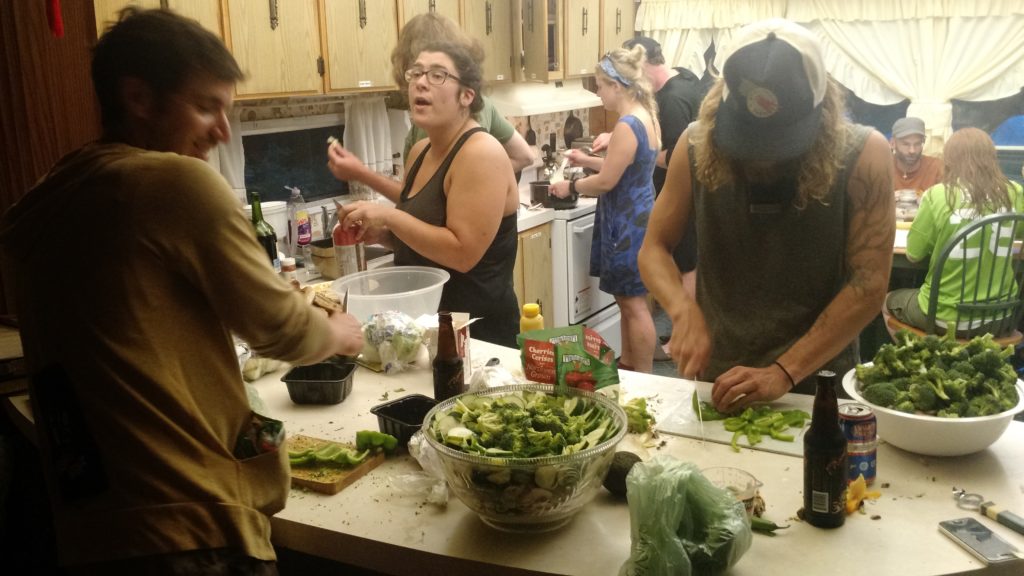 Hikers are true gluttons in towns and that was doubly true on the fourth of July. My favorite part of the evening, aside from the delicious food, was the rendition of the star spangled banner lead by a very intoxicated November on the hostel porch. 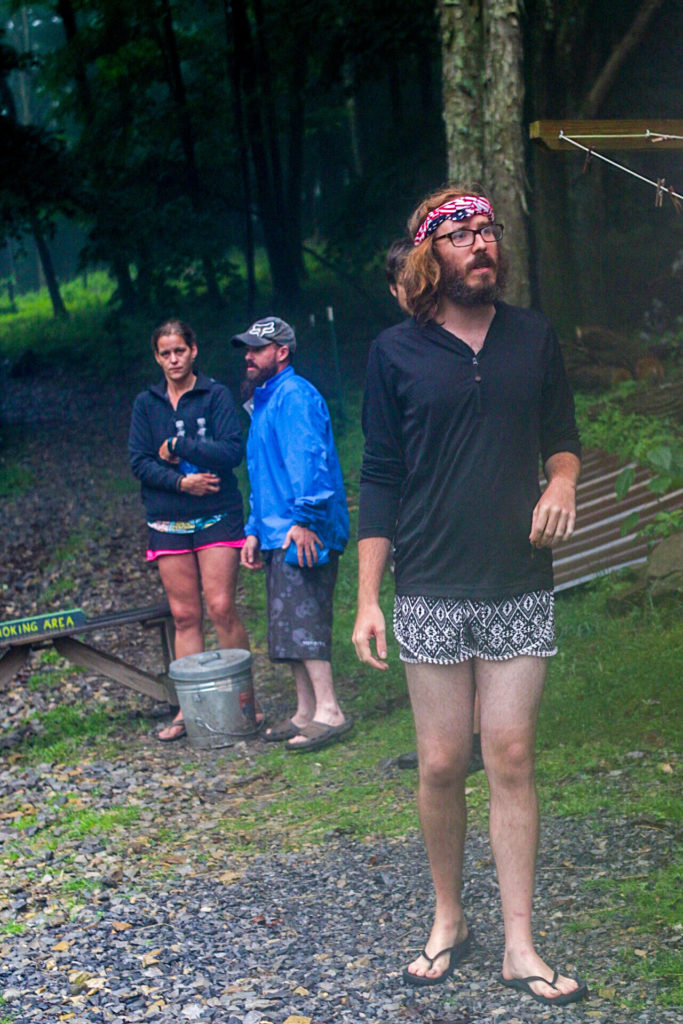 This is November. His pants were chafing him so he took to wearing short shorts provided to him by Rainbow Mama.

Oh we also made Space Panda an honorary US citizen after he shotgunned his first beer. Space Panda is from Canada and true to the stereotype is a very polite and considerate person.

It was a great night and will be a fourth of July that I’ll always remember.

That’s it for now. I’m back on the trail tomorrow. Will be pushing the miles for the next two weeks so I can meet Jillian in Shanendoah.

Thank you Veteran’s United Home Loans for being the title sponsor of this trip.