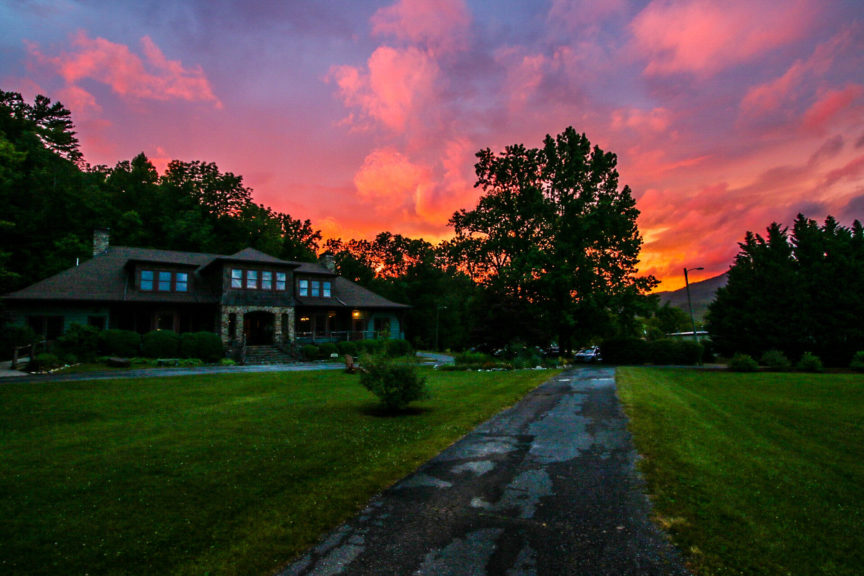 I’m writing to you from Hot Springs NC. I’m back in NC for the time being – the AT straddles NC and TN for a few hundred miles.

It’s rained on me for the last three days. I walked 18 miles in a downpour yesterday and now all of my gear smells like wet dog. But it’s all good because I experienced an insane sunset last night. I’ve never seen a sky so saturated with color.

I have a new trail name. It is Quadzilla. My quads are a minor celebrity on the trail. It seems like every time I meet someone new they’ll say “I heard about your thighs.”

So when a section hiker dubbed me Quadzilla I decided to keep the name and ditch Spruce Lee.

I’ve been drawing little Quadzilla cartoons in the trail journals. It’s actually become one of the favorite parts of my day. 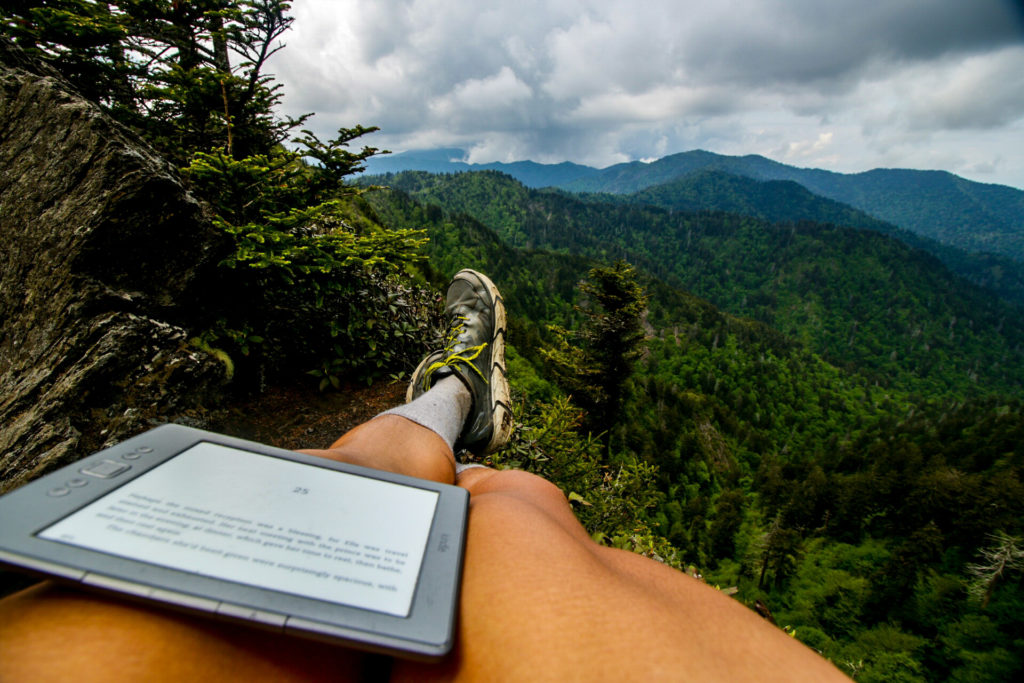 On Saturday I walked across Max Patch Bald. It’s supposed to be one of the most beautiful balds on the AT. I wouldn’t know.

When I crosses it was about 5pm and the mountains were covered in a dense fog with intermittent rain coming down. I could only see about 20ft in any direction and sometimes lost sight of trail markers completely.

That hike is what I imagine purgatory to be like. Desaturated, cold, wet, claustrophobic, and alone.

No pictures unfortunately, because rain. 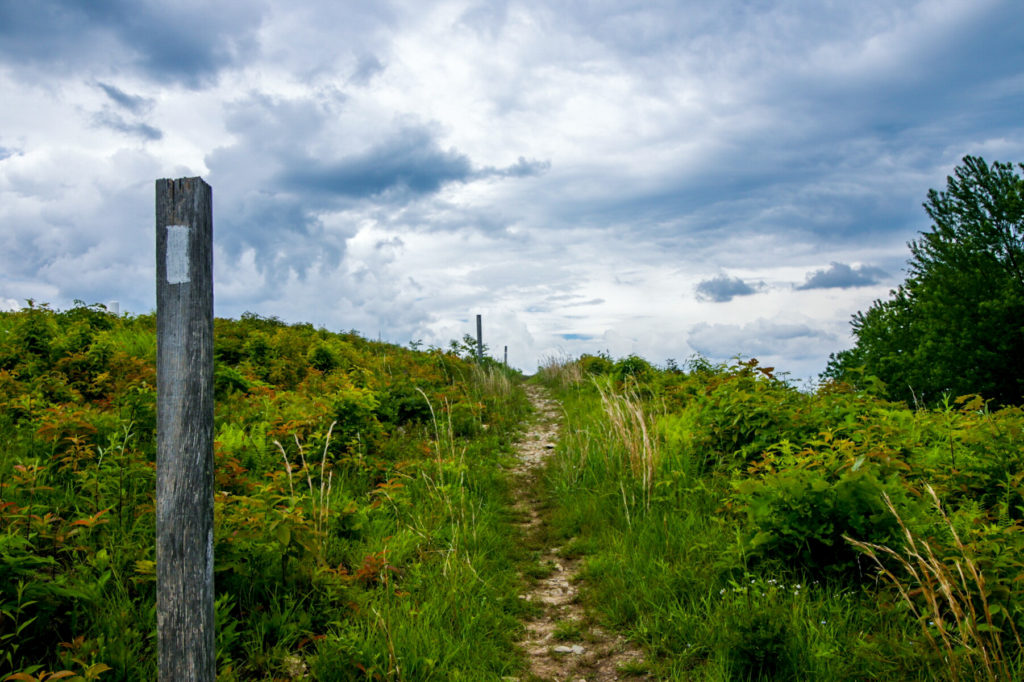 A different bald but still beautiful. max Patch would have been 5-6x bigger.

Apparently the bears are out in force this year and I must be the only hiker who didnt catch a glimpse of one in the Smokies.

One bear likes to hang out by the fire tower and has forced multiple hikers to seek safety in the tower while the bear sat below, begging for food.

Another bear stole a woman’s shoe at Cosby shelter. Apparently he likes to hoard hiker gear as they found stashes of random gear all around the shelter, but not the lost shoe. 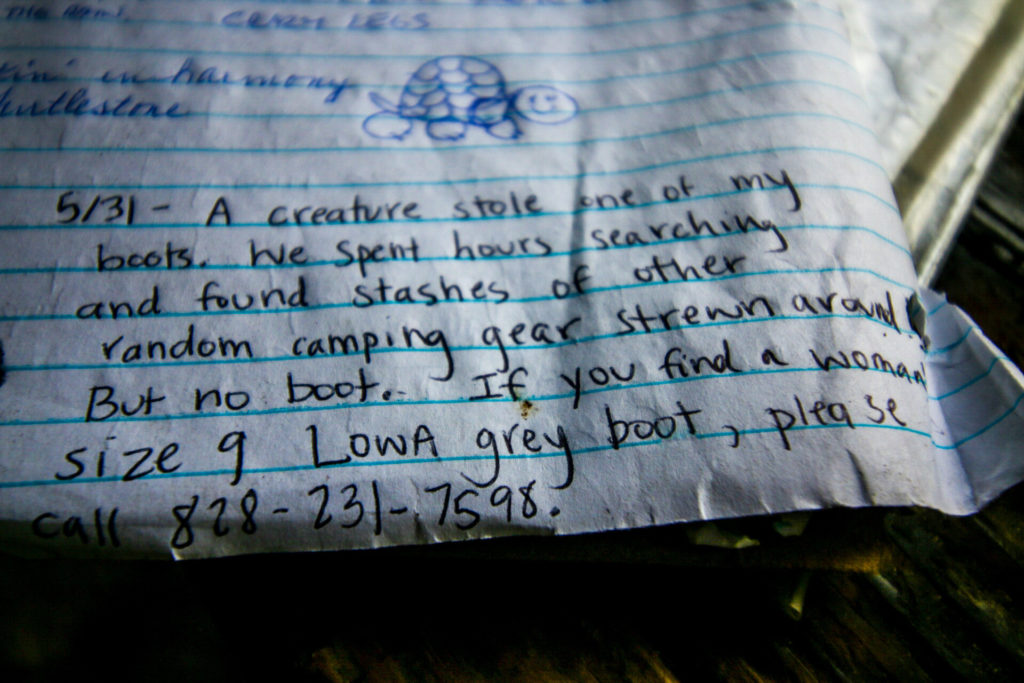 I met two FBI agents in the Smokies. Really cool guys. We talked World of Warcraft of all things ?. After I passed them apparently a bear stole one of their packs while they were in the latrines. So they had to chase the bear through the woods to recover the pack. I’m just picturing two FBI agents yelling at a bear to “drop the pack now!!!”

I hitch hiked for the first time going between Gatlinburg and Newfound Gap.

I was picked up in Newfound Gap literally three seconds after i stuck my thumb out. They were a nice couple from Alabama out on vacation.

Getting a ride back into the Smokies was more difficult. It was strange – I felt the pain of rejection from every car that drove by and I was really worried that people would think I was a vagrant or something. That’s another huge benefit of the trail – it forces you into uncomfortable situations that you can’t avoid. And after about 100 cars passes I lost that fear of hitching rejection. I was picked up by a super nice salesman who was going into the Smokies to do some fly fishing.

I think as I move forward I’m going to seek out new uncomfortable situations. Situations I would normally avoid in real life, to decondition that fear response.

That’s all for now. I like reading your comments thanks for everyone who has left a comment so far. My next stop will be Erwin TN which will put me well past 300 miles. By this point 50% of thru hikers who started in Georgia will have quit the trail.