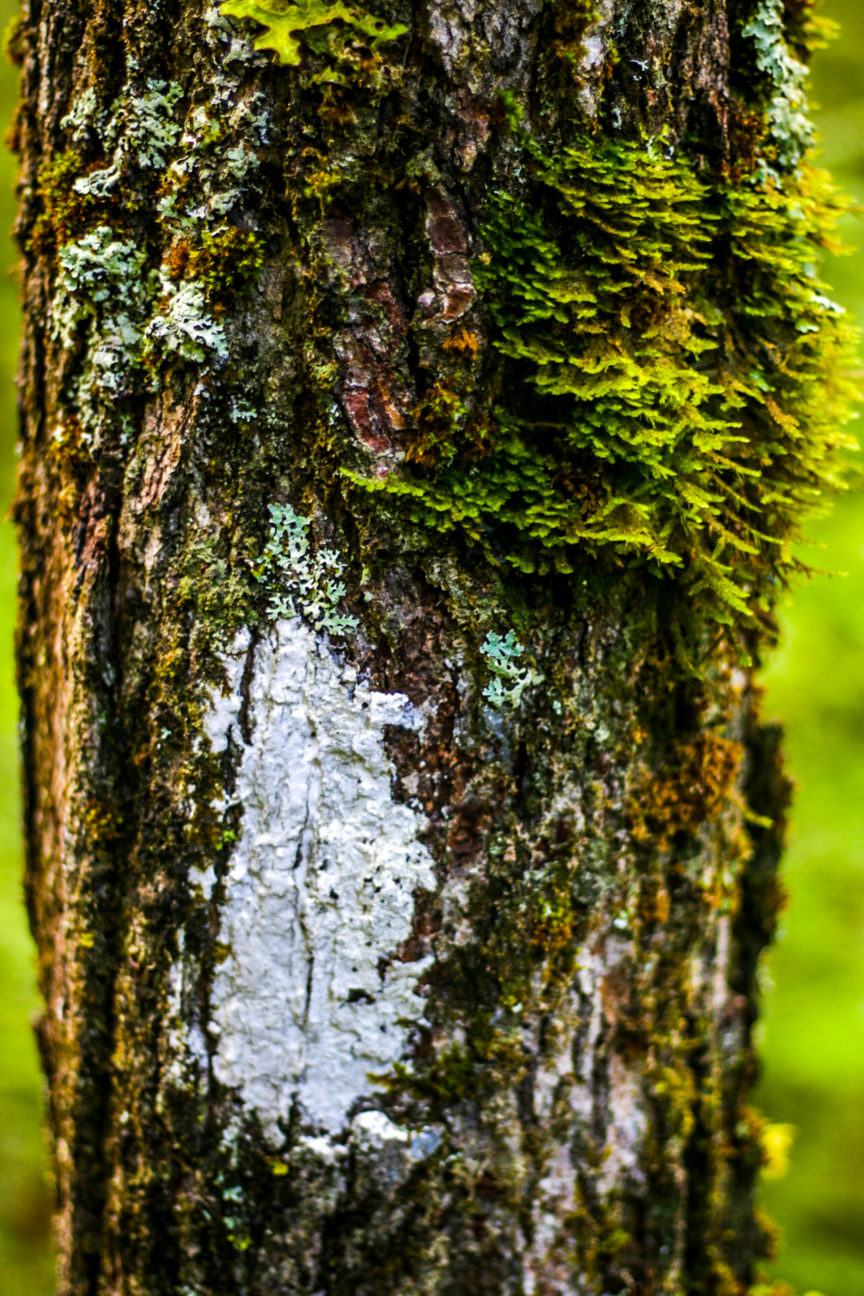 I’m writing to you from the Lakeshore House in Monson, ME. It’s a two story house that has been converted into a hostel and pub. True to its name the house sits on the lake and there’s even a dock and kayaks available for guests. 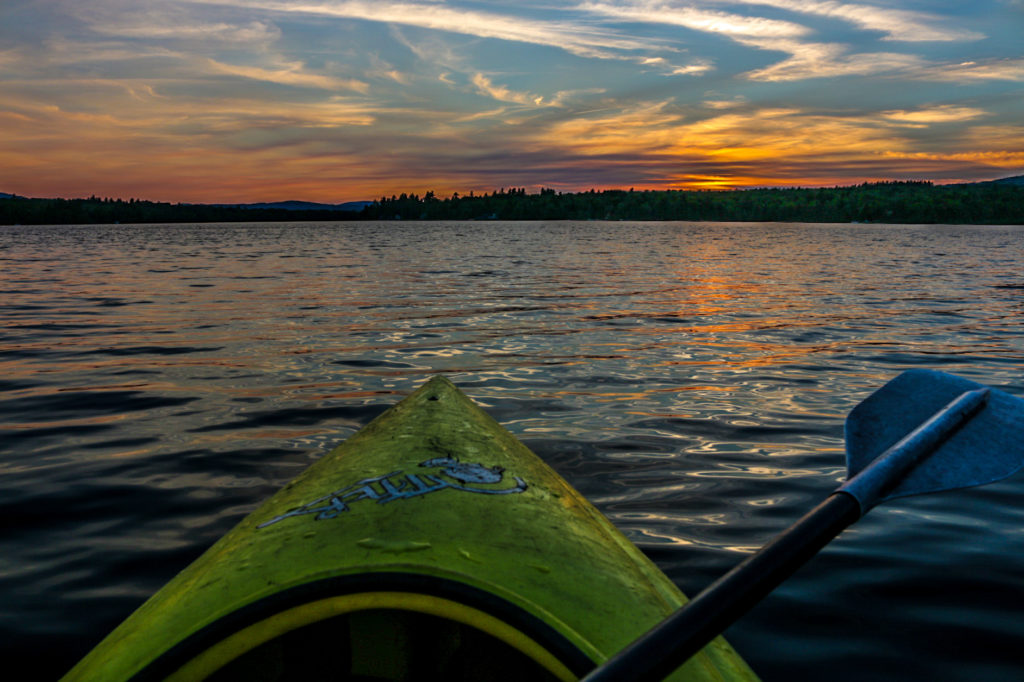 Pete’s Place, a small bakery and cafe is located next door. They serve the best breakfast I’ve had on the trail along with handmade pies and homemade ice cream.

My planned nero has turned into two full zeros. Can you blame me?

Mount Katadhin is the highest point in Maine rising 5,267 feet. The Penobscot Indians called Katadhin “The Greatest Mountain.” With good cause. When you see it for the first time there is no question that it is indeed Katadhin because it dwarfs the surrounding peaks and dominates the skyline. 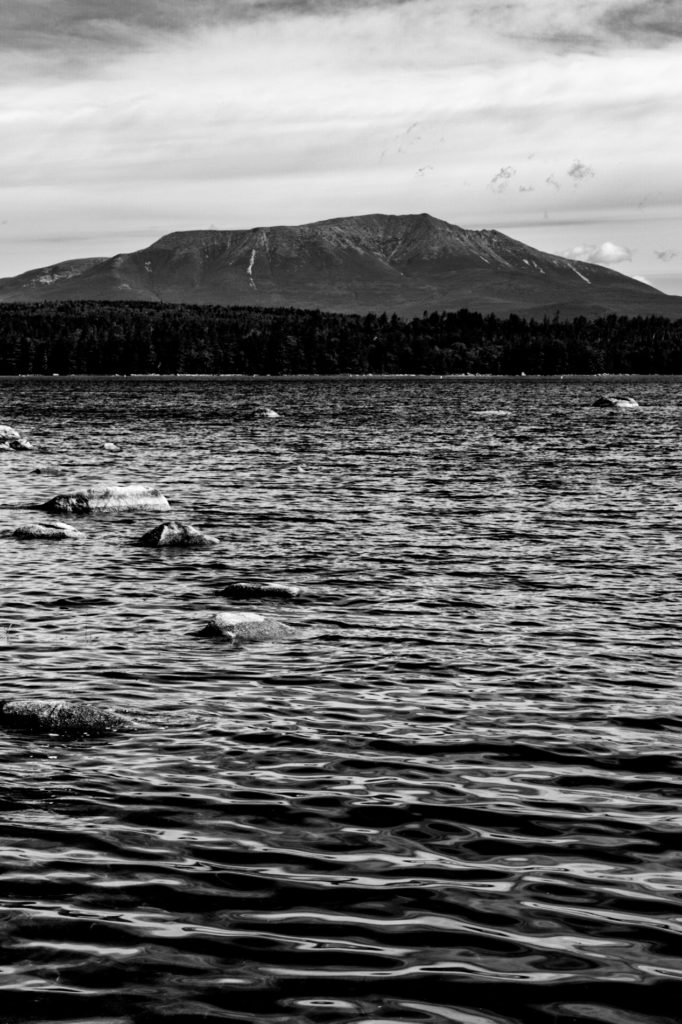 True to form the AT planners chose the most difficult route to the peak because why not? The Appalachian Trail follows the Hunt Trail up to Baxter Peak; one of several routes to the top. The Abol trail is a steady gradual climb. The Helon Taylor trail gently winds up the backside of Katadhin with two options to reach the peak – the saddle trail or knife’s edge trail. The Hunt trail attacks the face of the mountain with a 4,000ft climb. Not gently, not winding, but straight up. At times reminding me more of a bouldering gym than a hiking trail. 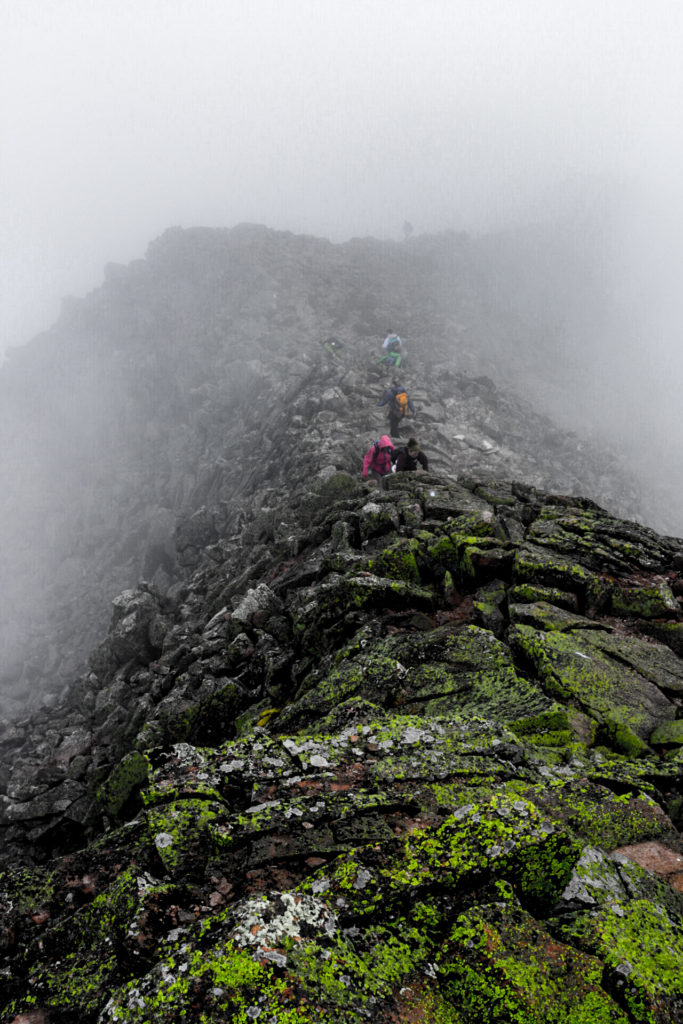 The ascent was difficult and treacherous. I climbed with a handful of northbound hikers finishing their journey and two south bound hikers, Simba and Beach towel. Simba had hiked half the trail and flipped like me. Beach towel was beginning her journey and technically her hike didn’t begin until she reached the summit. 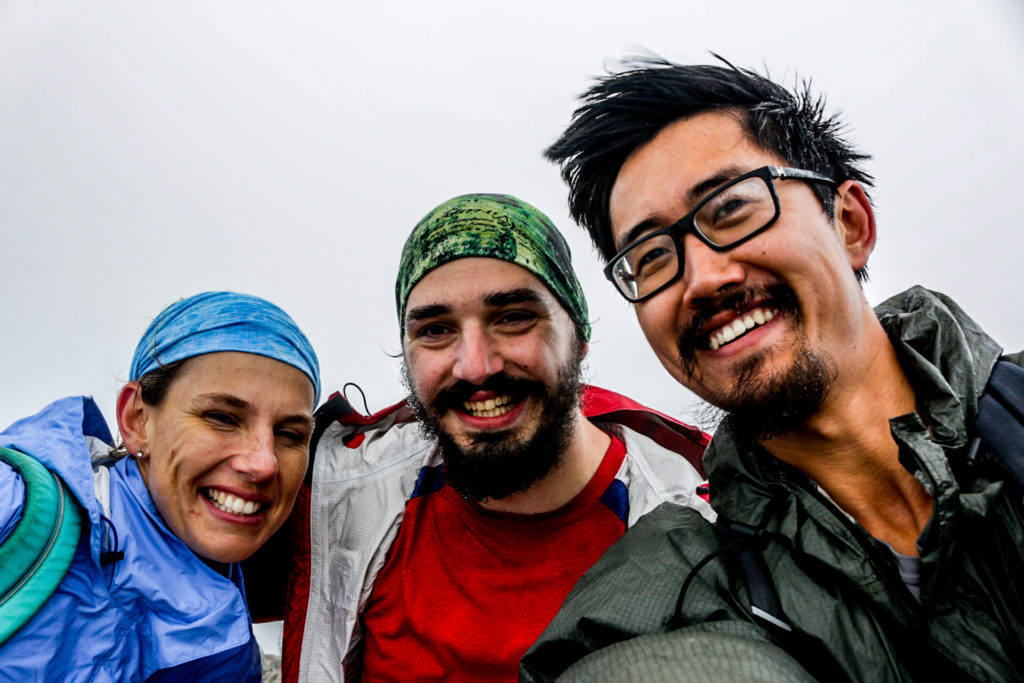 The forecast called for a sunny day but we experienced fierce winds and intermittent freezing mists during our ascent. The weather lent the climb an epic mood. I fancied myself a bearded Viking traveling across Scandinavian steppes. Because Vikings stood in line and waited for the party of phobic women to inch up the rockface right? I’m all for people conquering their fear of heights but it’s hard to be patient when you’re exposed on a mountain with a 60mph wind driving cold mist into your face.

It took three and a half hours to summit. I had my picture taken ontop of the Katadhin sign as is tradition then hiked part of the knife’s edge with Beach towel. A trail that follows a ridge line with truly precarious drop-offs. It was about this time that the clouds parted and we got our first views of the day. 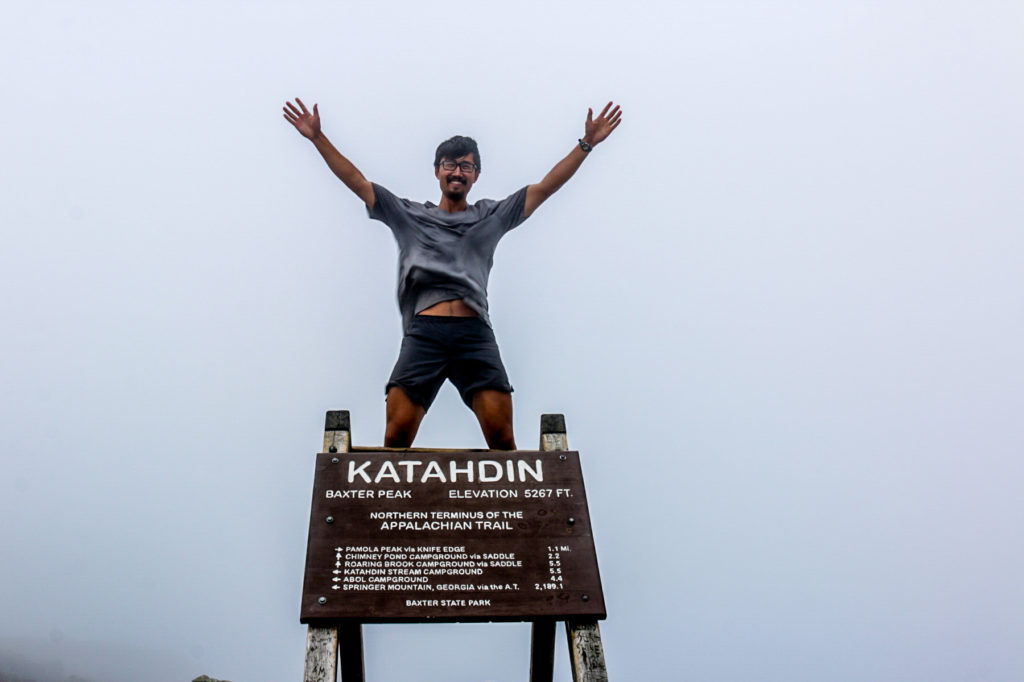 The descent was much more challenging than the climb up and my knees throbbed with pain by the end. It was like doing pistol squats for four hours on a decline. I camped in the Katadhin stream campground that night and prepared for the 100 mile wilderness. 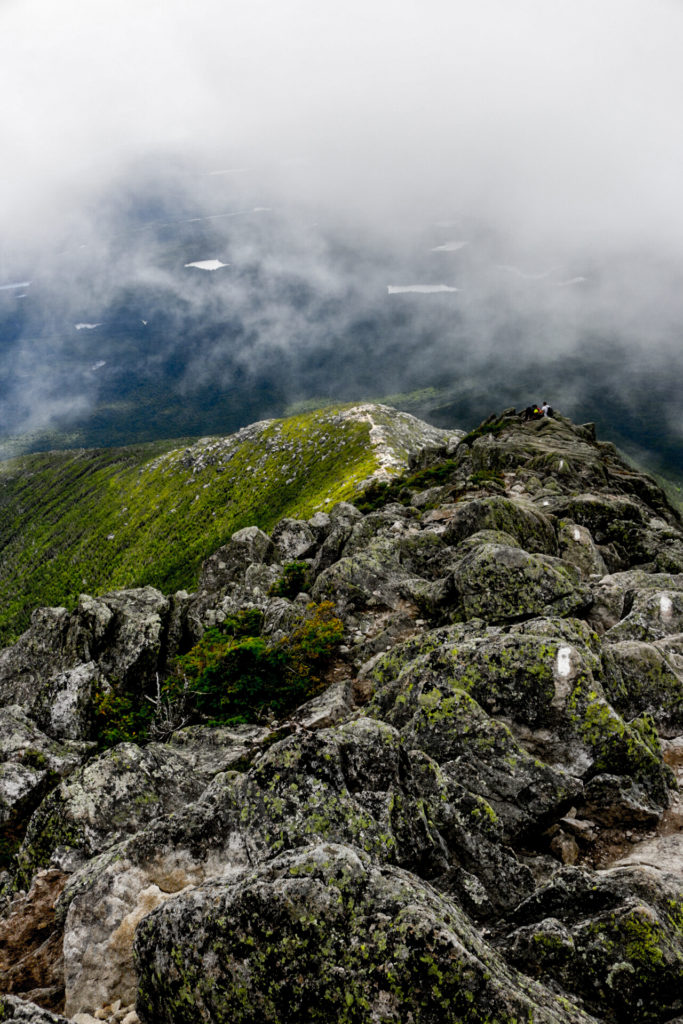 Easier up than down.

As you’d expect from the name it’s 100 miles of wilderness trail. It’s difficult but not impossible to get services inside the wilderness. Small dirt roads cross the AT every 15-20 miles and for a measly $80 you can hire a shuttle to drop off supplies for you.

I opted out of the food drop and carried eight full days of food; once again leaving town with a pack weighing over 50lbs. Ultra heavy backpacking, yay! 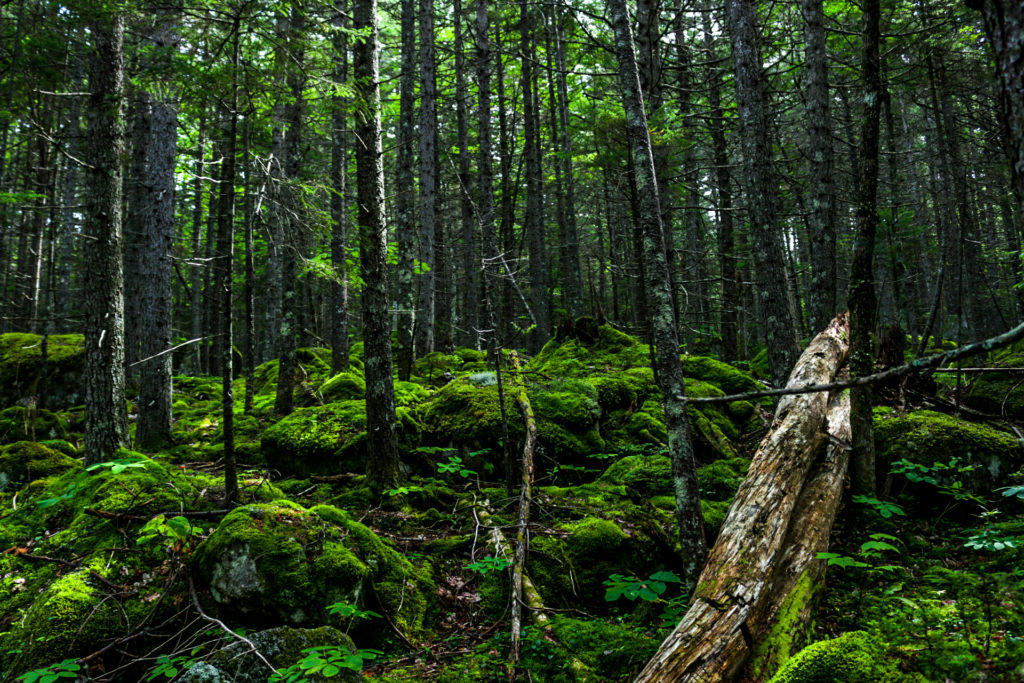 The 100 mile wilderness(just “the wilderness” from hereon) is beautiful. And wild. And a bitch to walk through.

There are roots and rocks. Swampy bogs. River Fords and the occasional beaver dam crossing. My pace through the south averaged 2.5-3.5mph. In VA I was regularly making 20 miles in a day without much trouble.

My first day in the wilderness it took six hours to walk five miles. It wasn’t elevation changes. Just the rocks and roots make it so you can’t walk fast. You’re constantly picking a meandering and ponderous path through a sea of natural obstacles. 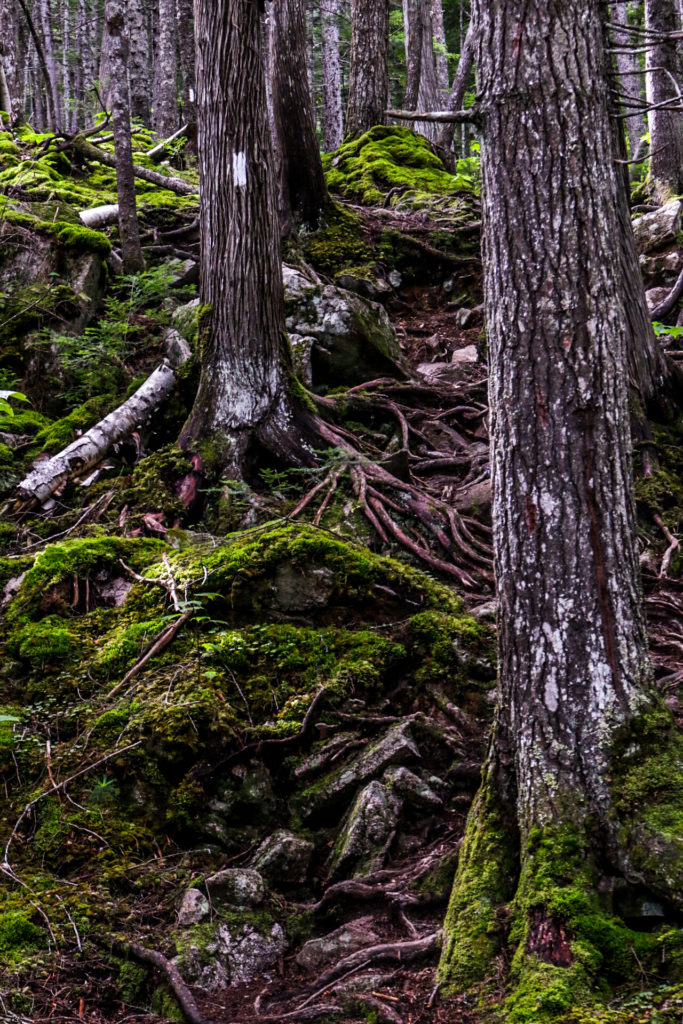 With all of that said the wilderness has been my favorite section of the trail by far. It feels very Tolkienesque. Moss covered boulders that glow greener than green. 100ft trees with massive exposed roots. Towering waterfalls and idyllic lakes. 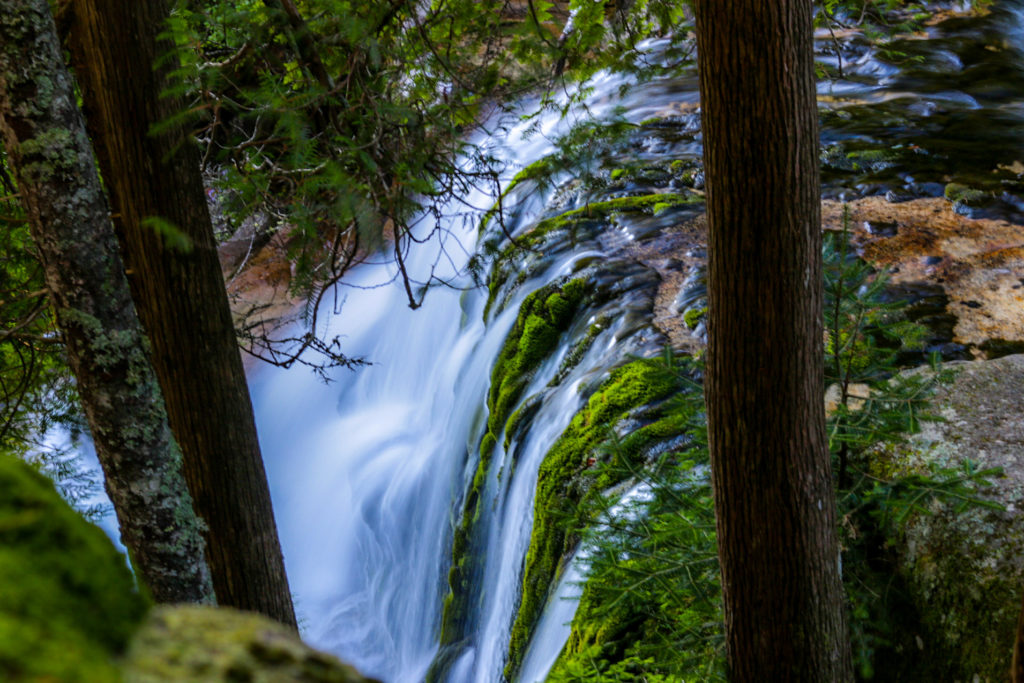 It’s a wild place. Untainted by man. At night you are treated to a tapestry of stars untouched by light pollution. The wind carries the cry of the loon(eeiry and LOUD) and not the sound of traffic. 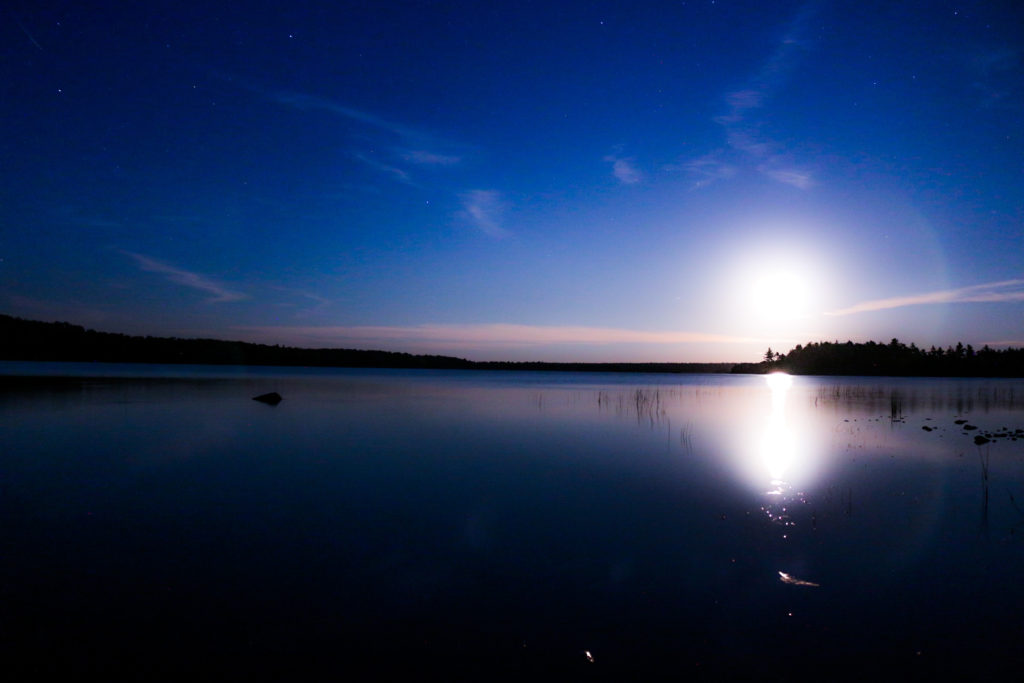 And my favorite place in the wilderness was Antler’s campsite. The camp sits on a peninsula that juts out into a large pond. The tentsites are covered in a layer of soft pine needles and protected from the wind by young red pine trees. There’s a rocky beach that extends around the peninsula and affords views of the sunrise and sunset. 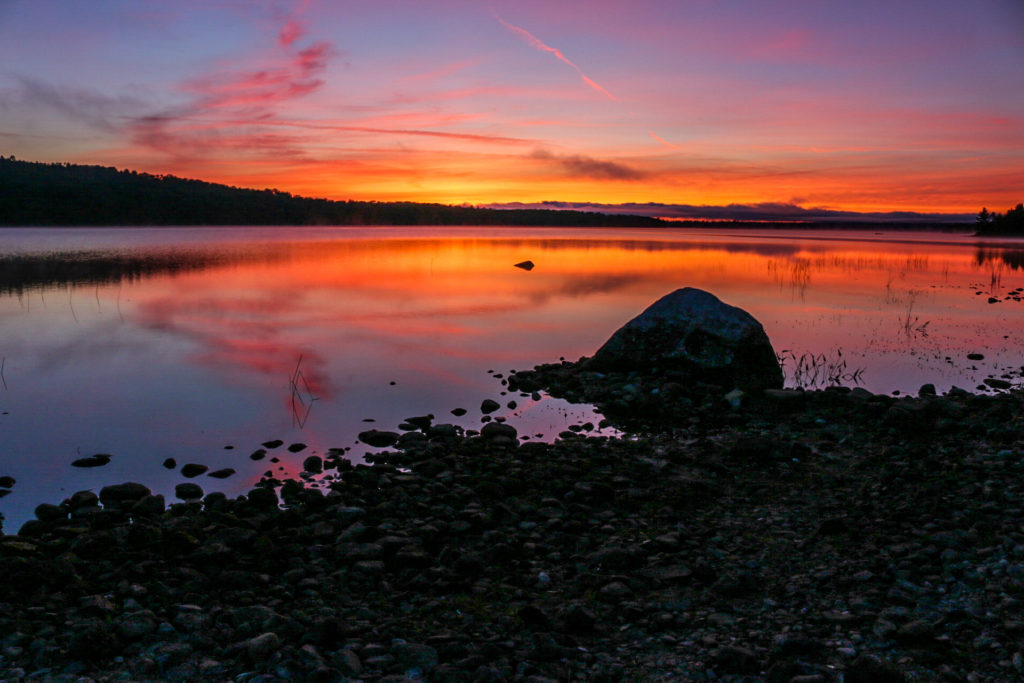 I took a short day at Antler’s and set up camp around 11am. Then I went swimming and hunted mussels. I’d heard from other hikers that there were fresh water mussels and wanted to get some fresh protein!

I was not disappointed. I found the mussels about 50ft out from the shoreline and quickly gathered two dozen. I cooked a few experimentally in my Jetboil. They looked good. Smelled okay.

They did not taste okay. They tasted like a fishy testicle. Seriously. Imagine the chewy texture and appearance of a testicle and then slap on the taste of a fish going bad. Blegh.

So the rest of the mussels I harvested got to live another day. But it was still very entertaining to hunt them down and it helped pass the time.

Later in the day some other southbounders joined me at camp. Beach towel, Hobo, and two girls and their dad(Rachel, Richard, and another name that eludes me right now).

That night we built a fire on the beach and enjoyed a full moon. That’s been one of my favorite days on the trail so far. 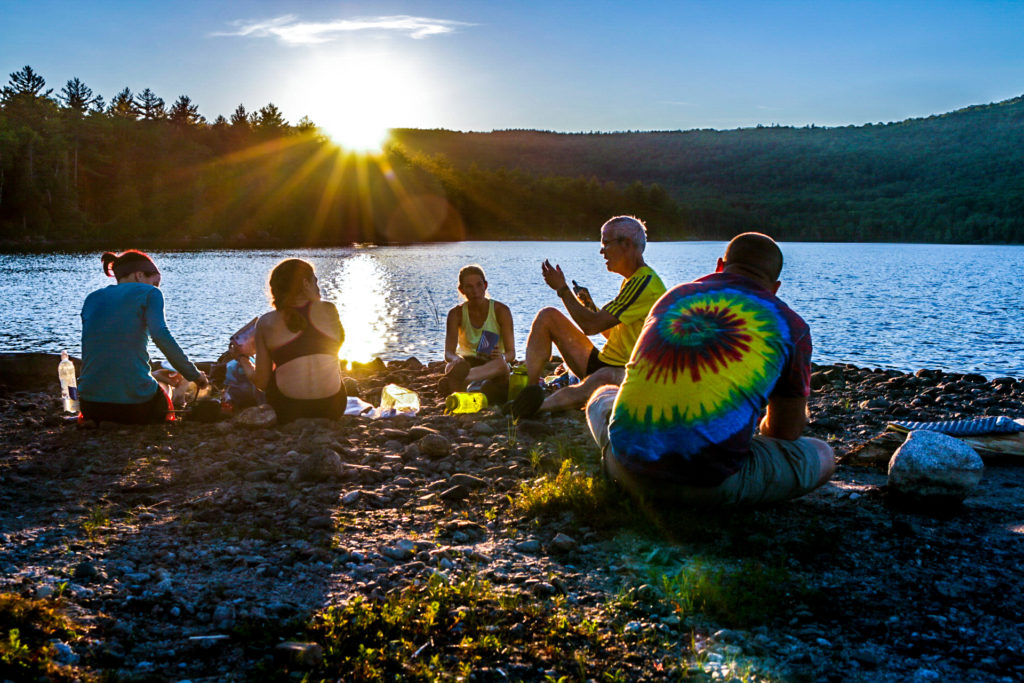 After Antler’s I pushed bigger miles and longer days because I was running low on food. I haven’t seen any of the southbounders from Antler’s since. We’d kept roughly the same pace for the first few days in the wilderness and I’m hoping they’ll catch up aftery zeroes. It was nice to see familiar faces at the end of the day.

There’s a very definite correlation between hunger and enjoyment on the trail. Simply – the hungrier you are, the less you enjoy hiking. My last two days in the wilderness sent me into my lowest low yet.

I woke up on Monday to the sound of rain hitting my tent… and pouring in through the side. I had been lazy in staking down my tarp and very quickly a sizeable amount of rain made it inside. What’s the point of setting up the rain tarp if I’m not going to properly secure it? A lesson learned.

I stayed dry enough since my sleeping mat kept me elevated off the ground but my gear got a nice soak and my pack consequently gained five pounds. 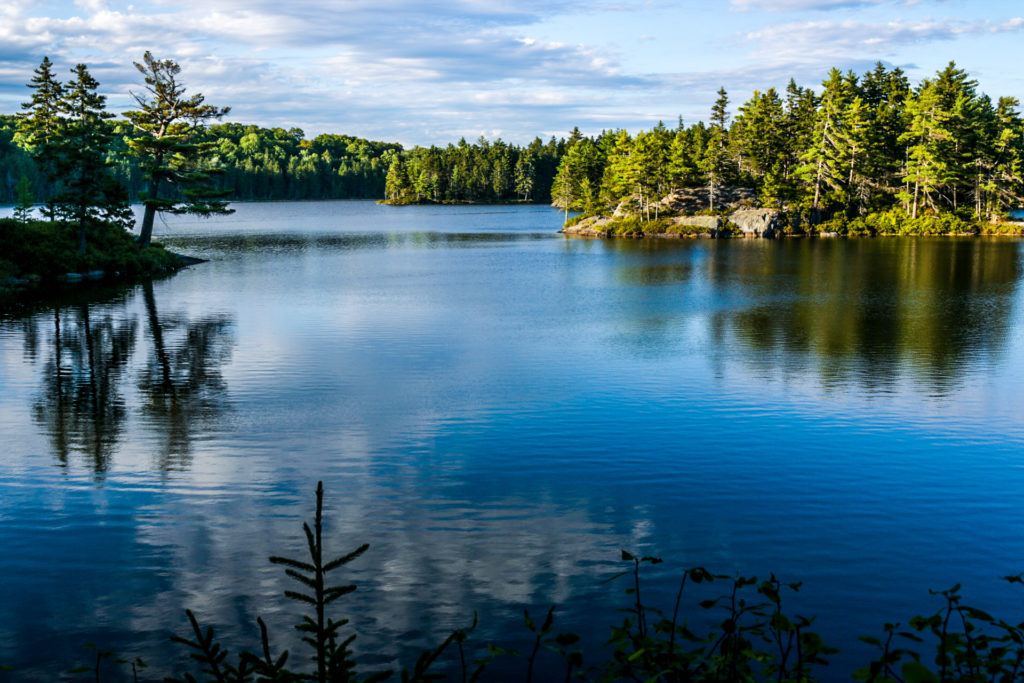 The last pond before leaving the hundred mile wilderness.

That day I hiked over the chair back mountain range which consisted of four peaks. The wind was howling and threatened to push me over when I hiked above the treeline. And the temperatures were in the mid 60s. Overall a cold and miserable day compounded by the fact that I was running out of food and had to make do with about 2,000 calories instead of my usual 4-5,000 calories.

The next day, my last in the wilderness, called for 19 miles. I woke up early to ensure I could make it into town before dark but my pace was hampered by a lack of calories. It took almost 13 hours to hike those 19 miles. Thoughts of food consumed me. Images of pizzas and burgers swam torturously through my mind with every step. At one point, about ten mile before town, I felt that peculiar feeling which precedes a loss of consciousness. That light headed feeling when you stand up too quickly.

I didn’t pass out but I definitely wasn’t okay. I imagine I rather resembled a drunk zombie as I shambled the last few miles into town.

But all is well that ends well. I made it into town half an hour before the kitchen closed in the pub and ordered two entrees. Pot roast and quesadillas. The waiter was suitability impressed that I cleaned both plates.

I started the wilderness at 190lbs. I walked into town at 178lbs. I’m now back to 184 and hopefully can put on another 3-4lbs back before I head back out.

There’s a 5lb burger challenge at my next town stop. I can’t wait.

Okay that’s all from me for now. I have more stories but don’t have the willpower to keep typing on my phone. Thanks for reading. I encourage you to visit Maine if you’ve never been. It’s beautiful!!!