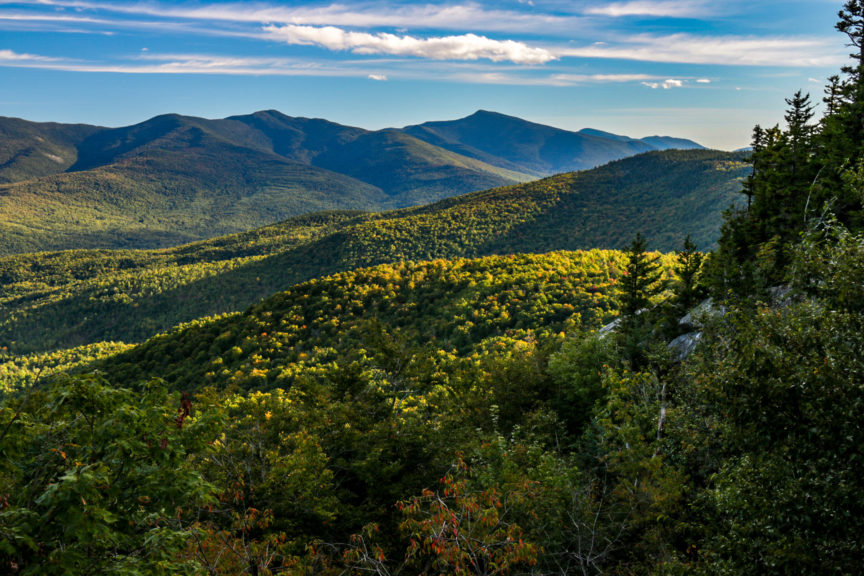 I’m writing from the White Mountains Hostel outside of Gorham, NH. It has a reputation as one of the best hostels on the trail. The reputation is well earned. It’s clean, organized, and very comfortable. Today makes a double zero.

The last hundred miles through southern Maine have been the roughest terrain I’ve encountered yet. The mountains are tall. The climbs are steep and devoid of switchbacks. The trail is an absolute mess of slick rocks and annoying roots. It’s slow going and dangerous hiking. 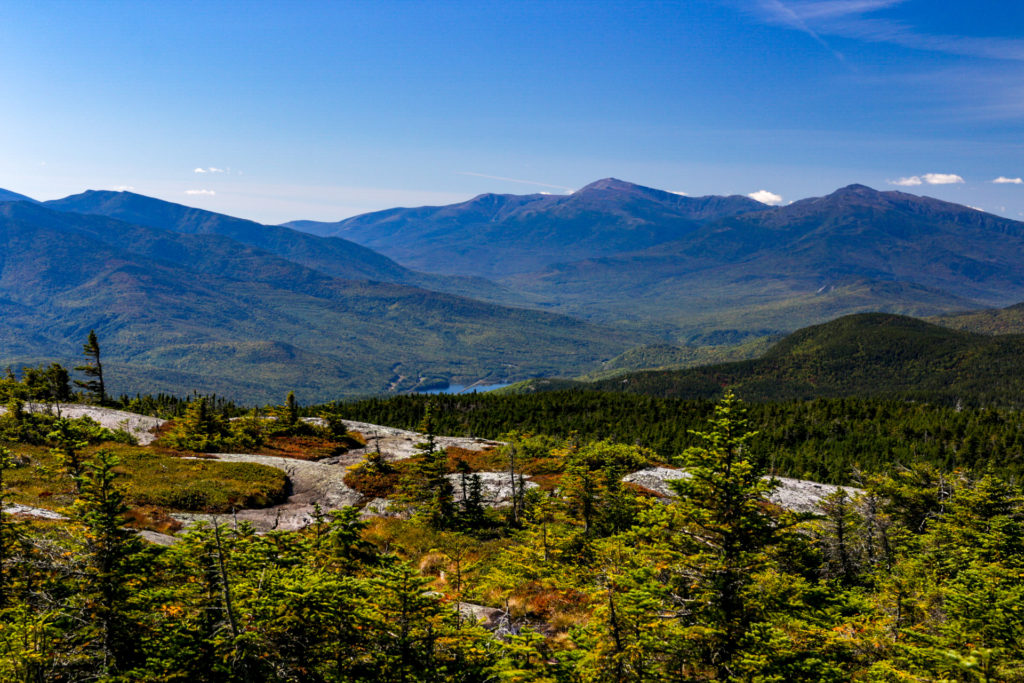 I fell twice on Friday. The first fall while I climbed down Mahoosoc arm, which is the steepest mile on the AT and again while navigating Mahoosoc notch. I caught both falls on video and didn’t get injured so that’s a win in my book. 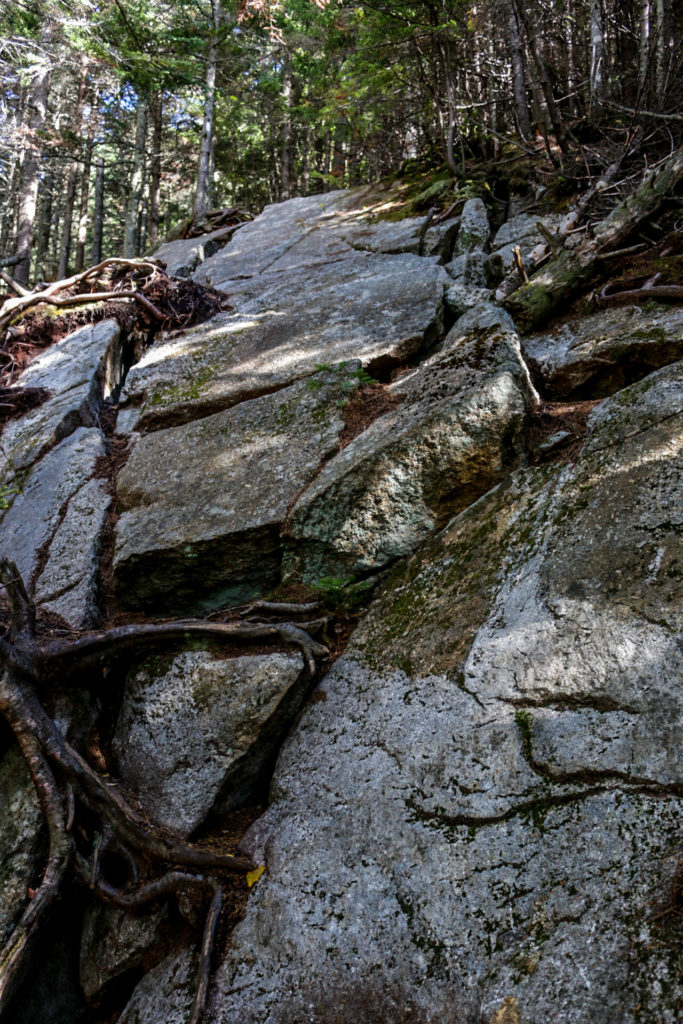 Imagine descending this in the rain.

The notch is described as “the most fun and most challenging mile on the AT.” It’s a corridor full of fallen boulders. There are blazes but no real trail. It’s up to the hiker to find their own path over, under, and through. I found it to be a pleasant change and it was fun to use my pulling muscles for once. 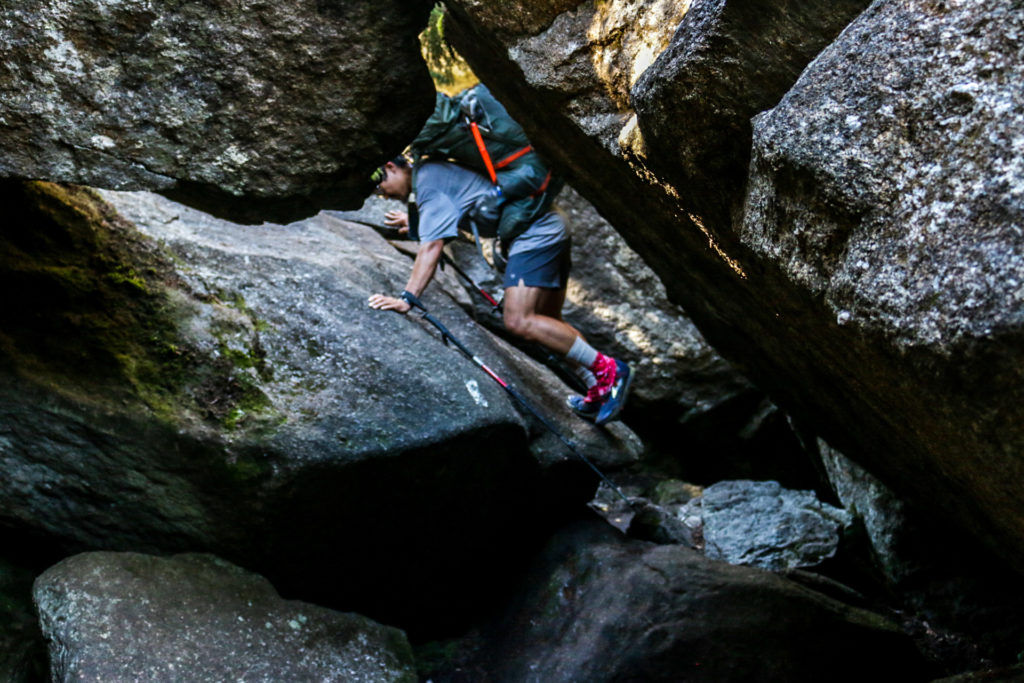 If someone asked me to describe southern Maine I would call it a series of precipitous rock scrambles. Maybe “steep, sometimes technical mountain crossings.” I would not describe it as a hiking trail. 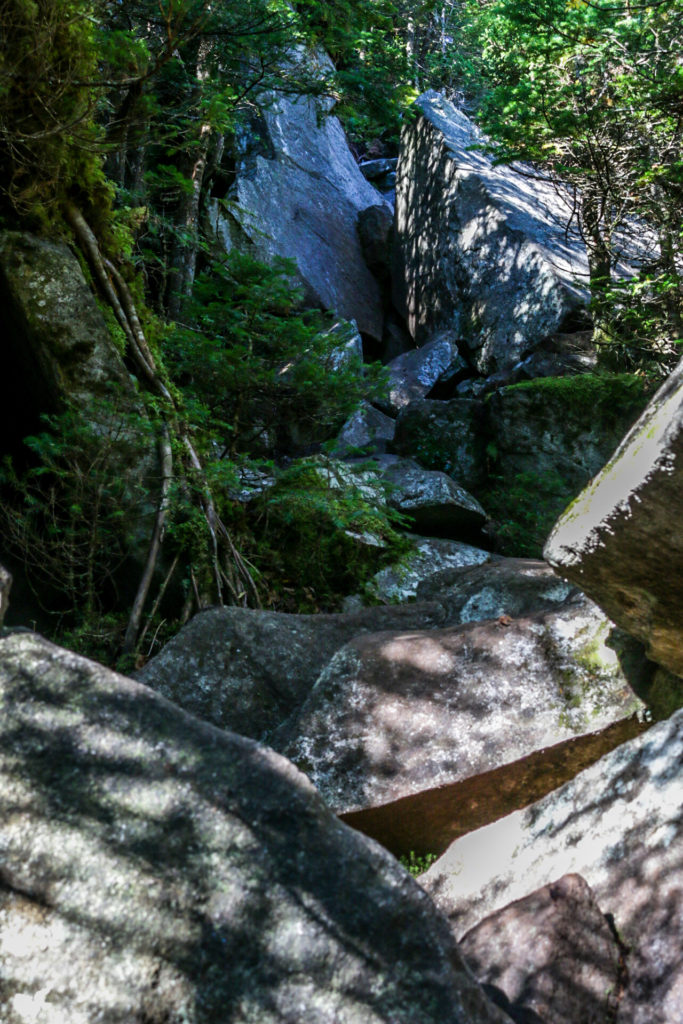 To quote another hiker, “you’re not a trail, you’re rocks!”

In the Southern states a good hiking pace is between two to four miles per hour. Here most hikers average closer to one mile per hour. You’re constantly climbing and descending the most ridiculous obstacles. Smooth bald rock faces that sometimes are as steep as 60 degrees. Big random piles of rocks. I had a heart stopping second on Saturday when I skied down such a rock face. My shoes just decided not to grip and I slid eight feet down this rock like an ice skater, arms akimbo, cursing. 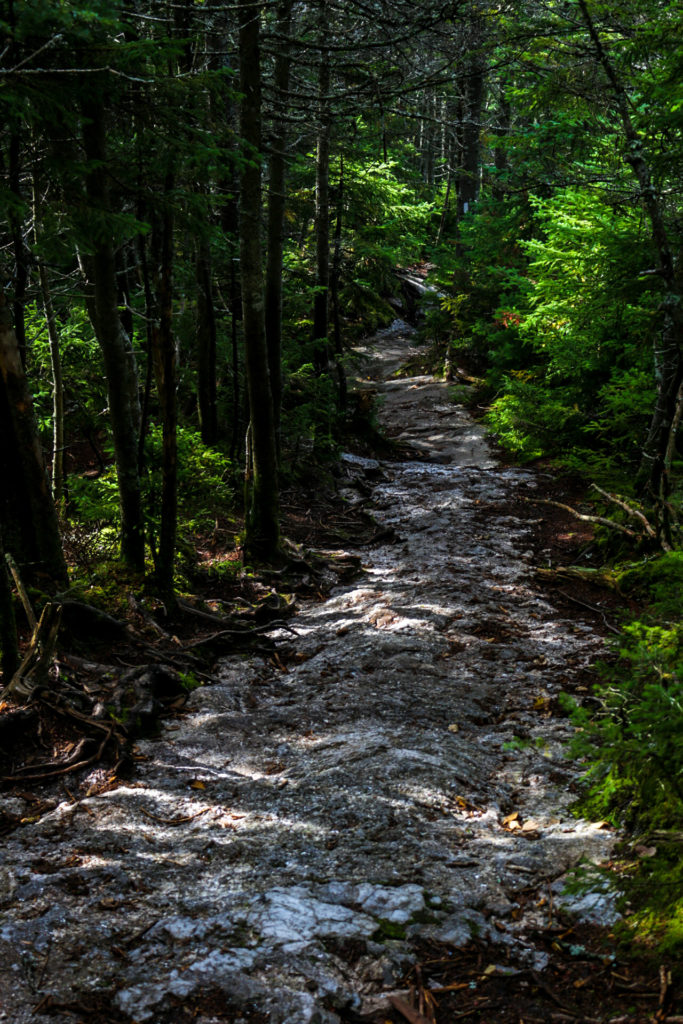 Bare rock. So much bare rock.

I’m surprised no one talks about the dangers here. In the best weather the “trail” is treacherous. In inclement weather it can be downright impassable. I met two NOBOs with massive swollen knees as I climbed out of Grafton notch. One had injured his knee coming down Mt. Success and was limping his way to Grafton to hitch to the hospital. The other hiker hurt his knee on Mahoosoc arm and had it all wrapped up. I met an older hiker in Stratton who ended his 2015 thru hike after falling and injuring his leg in the Notch and had come back to finish Maine this year.

Luckily my falls only caused some slight bruising but they’re good reminders that the Appalachian Trail is not to be underestimated. It’s not just a “walk in the woods.” The danger is real and care must be taken with every step.

Enough whining about the rocks. I want to tell you about Jim Wells.

I first met Jim briefly at Partnership shelter in Virginia in June. I didn’t get to know him there because I was pre occupied with pizza (there’s pizza delivery at partnership) and he was headed southbound at the time. We met for the second time climbing the Saddleback Mountains in Maine. 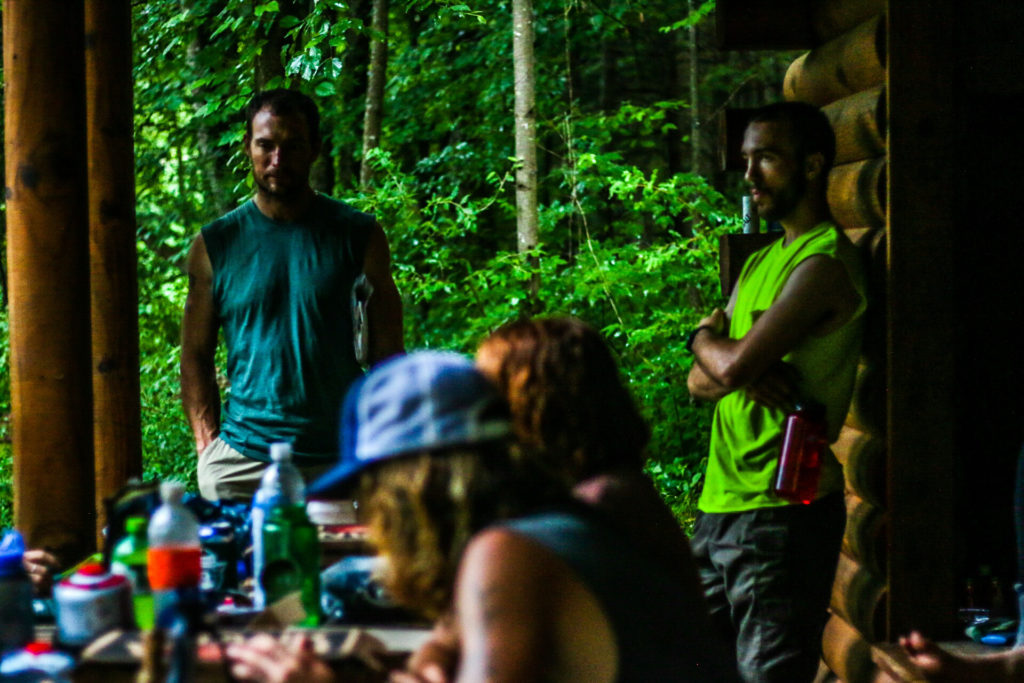 Pizza at partnership shelter in VA.

Jim is in his 60s and started hiking the trail in 2008. This year he will finish his last remaining sections and will have completed the entire trail. Jim has a psychiatry practice called the Center for Creative Balance in North Carolina. He’s a brilliant man and has the most interesting stories. 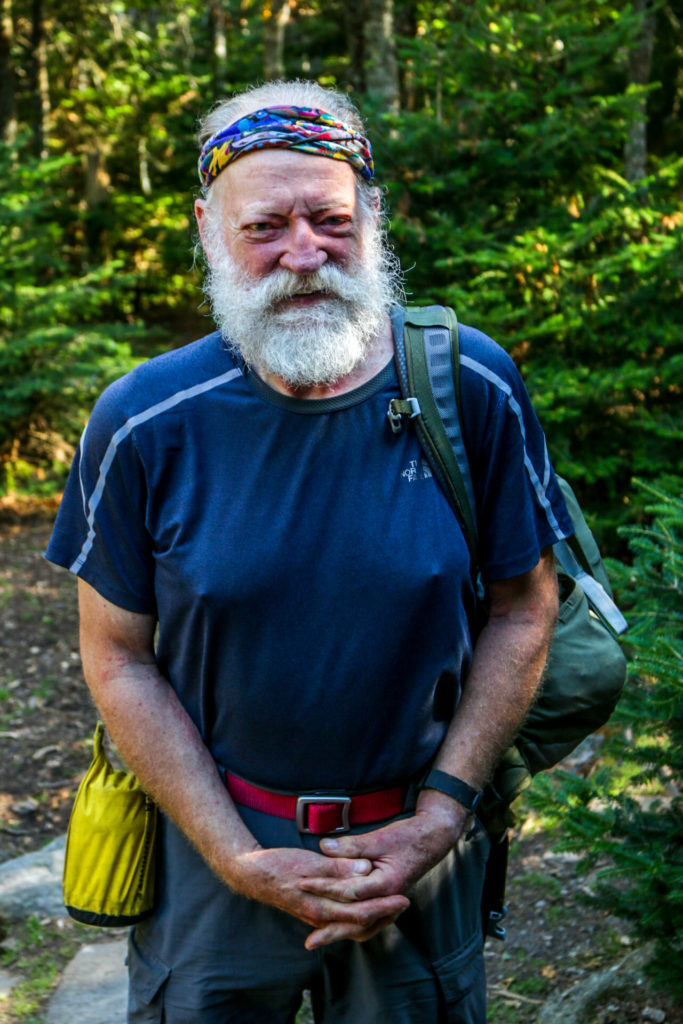 We ate lunch at a shelter in the Saddleback’s and got on the topic of consciousness. Three hours later we were still talking and had covered the gamut of topics ranging from near death experiences, reincarnation, astral projection, and dousing. If you know me you’ll know how out of character it is for me to speak with anyone, let alone a stranger, for this long. But Jim doesn’t feel like a stranger. He feels like an old friend that I haven’t seen for many years.

We crossed paths several times over a week and had more long conversations. Our talks are what sparked my last blog post on musings on life.

We talked about the way the trail brings people together at seemingly the perfect moments, to give each person exactly what they need exactly when they need it.

I parted ways with Jim with the profound feeling that nothing in this life is coincidental. That we are all interconnected and that at each moment we are exactly where we’re supposed to be.

I’ll be hiking out into the White Mountains tomorrow. It will be ten days of serious mountain climbing, with peaks that rise above 6,000ft. Thanks for reading, I’ll see you on the other side!