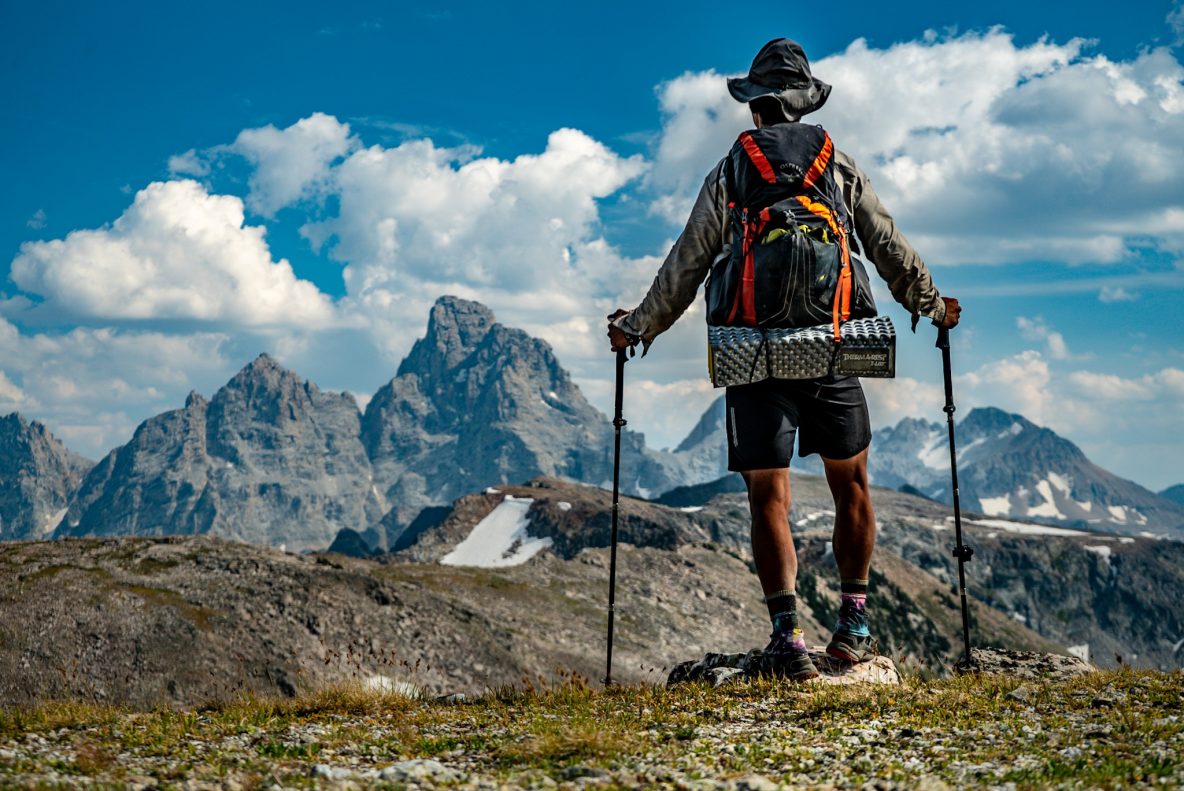 Hi! I’m writing to you from Teton Village, Wyoming. It’s a small ski-resort near Jackson, Wyoming.

First, thanks for following along and sorry for the lack of blog updates. I’ve been mostly posting to Instagram – www.instagram.com/jackjoneshg and YouTube: https://www.youtube.com/playlist?list=PLOVv1zGOyziaydXRuaEpjWF60Dsjo4Z2k

I’ll catch you up in this post about everything that’s happened in the first month and a half of the hike.

I want to thank Doug and Linda and Xiao as new patrons on Patreon and Nancy, Nelson, Andrzej, Brad, and Dave for continuing to support the journey on Patreon. If you enjoy the content and want to help make these trips more sustainable for me please visit https://www.patreon.com/user?u=5796017 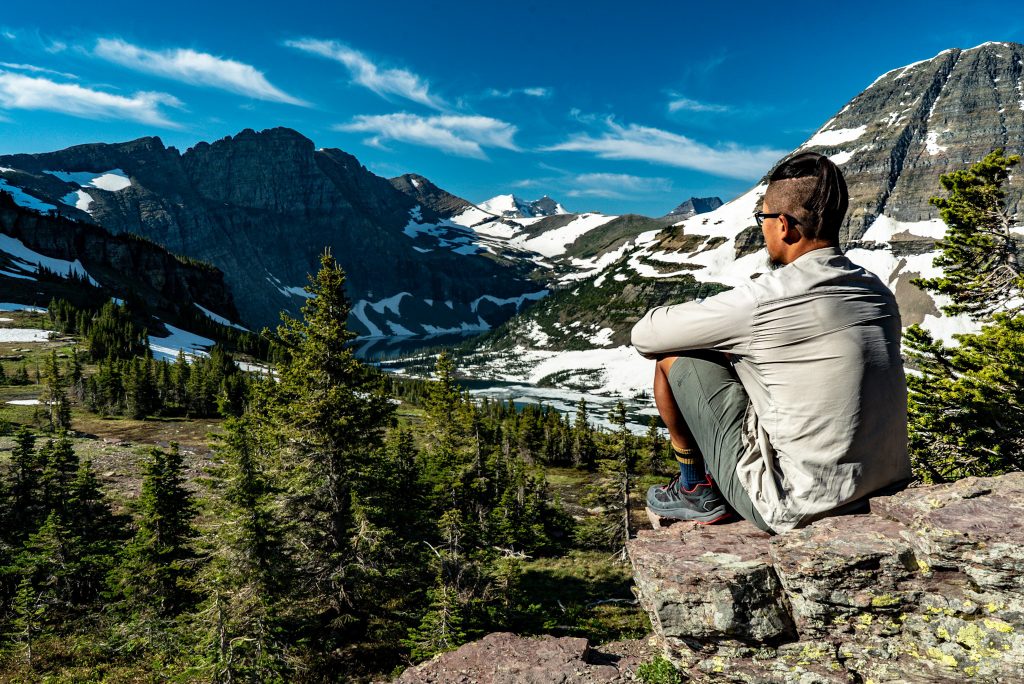 The Continental Divide Trail starts at the Canadian border in Glacier National Park and roughly follows the mountain ranges of the divide all the way to the border of Mexico in New Mexico. Glacier was immensely beautiful. Rugged peaks that stretched up over 10k feet which towered over pristine alpine meadows and clear blue glacial melt lakes.
Glacier also holds a large population of grizzly bears.  Black bears will run away from humans, grizzlies will eat humans. This was my first time backpacking and camping in grizzly county and walking through the dense undergrowth in the lower elevations definitely made me nervous. I had my bear spray loaded and ready to go. But I didn’t see a single bear there aside from a black bear running on the road. Saw lots of scat and prints though.
Even though I didn’t personally encounter any grizzlies I’ve met two CDT hikers that have had close and personal encounters. Megaman, a northbounder was almost eaten by a grizzly. 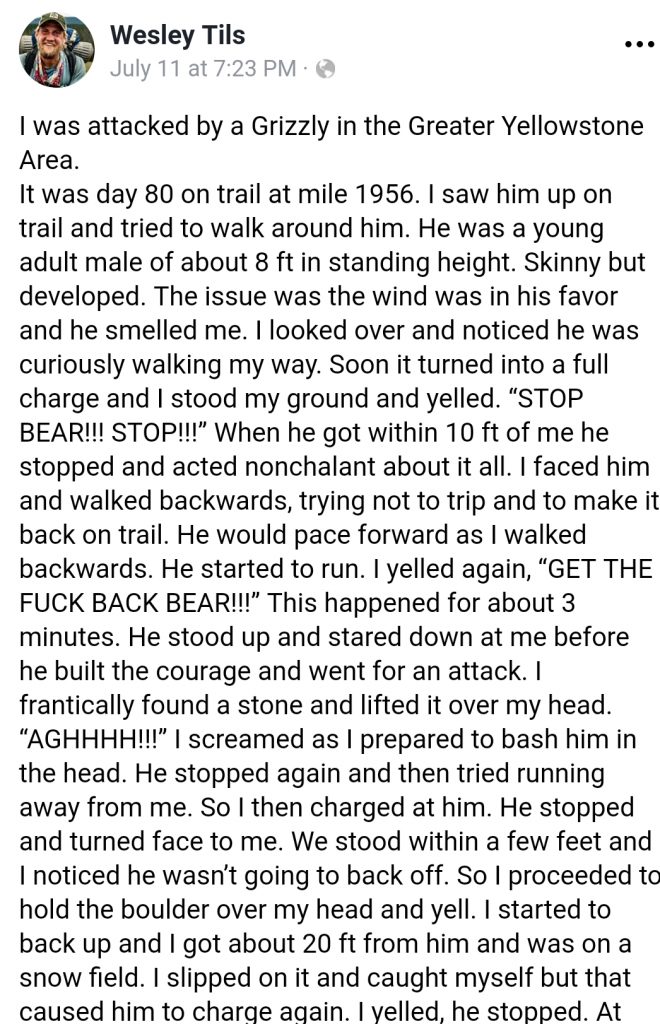 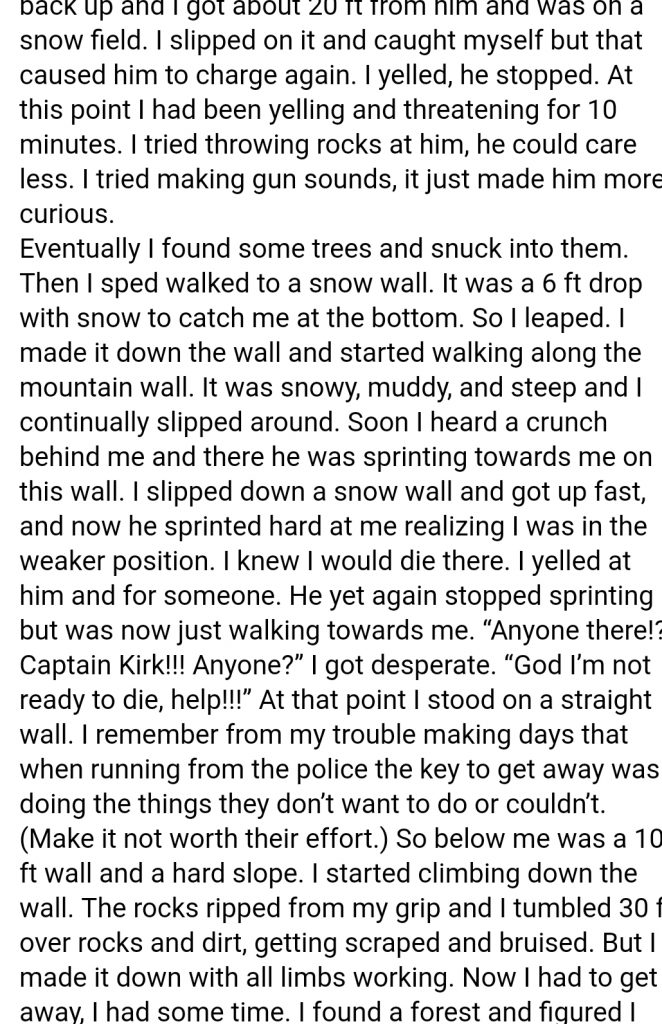 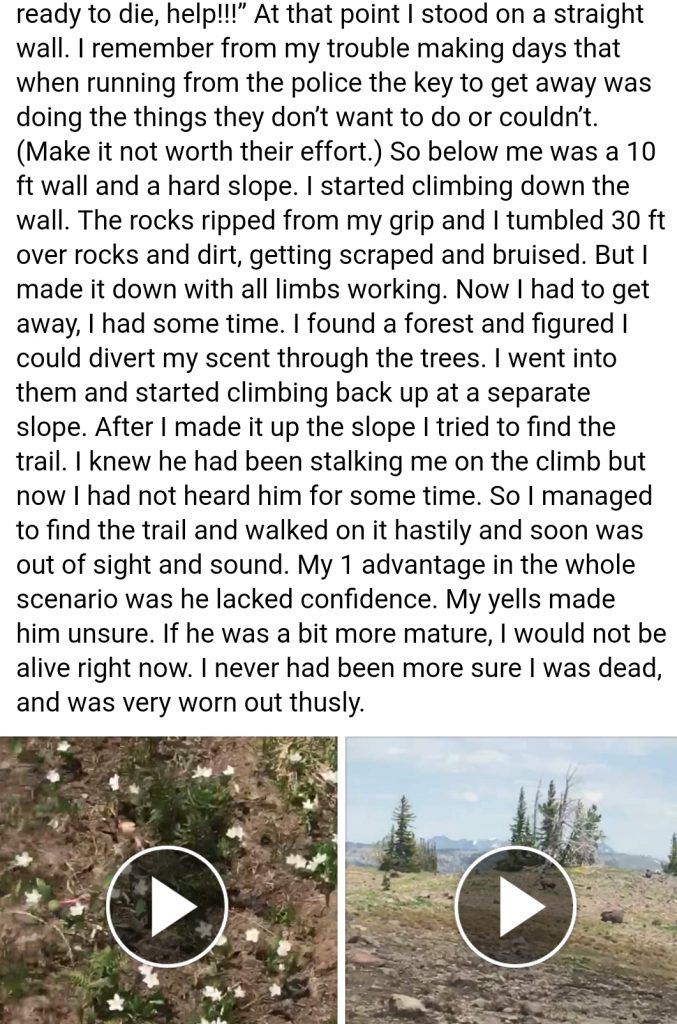 I also read an account on the CDT Facebook group where a hiker had to deploy his bear spray at a oncoming huge grizzly in Glacier. 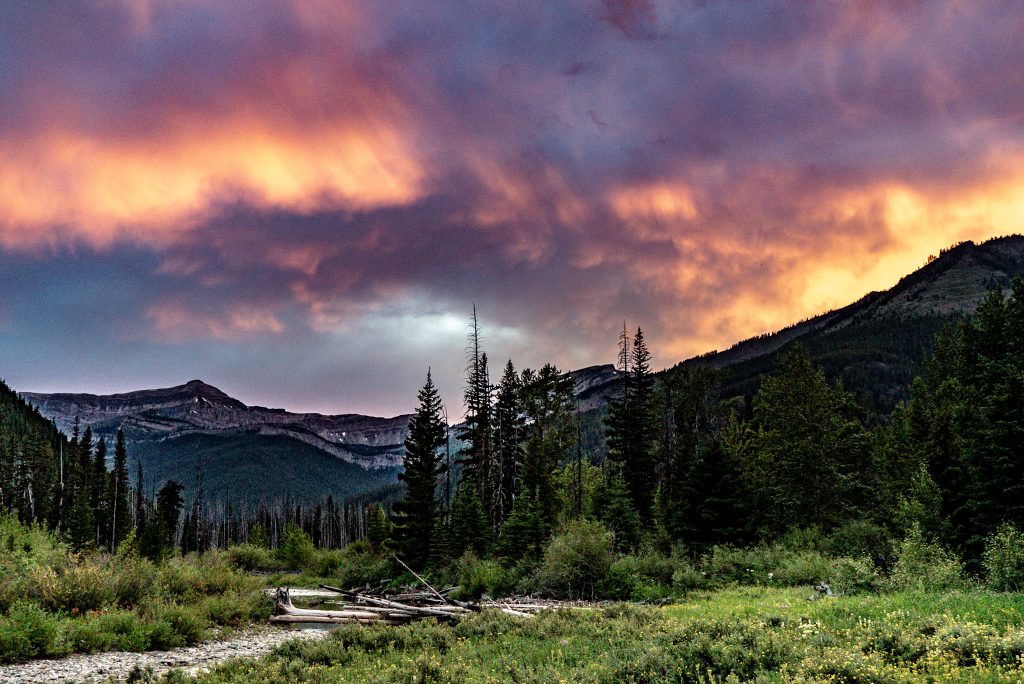 Sunset in the Bob Marshall Wilderness.
From glacier we hiked through the Bob Marshall Wilderness. This place was even more wild and beautiful than glacier and with way less tourists since the only way in is on foot or horseback. Again lots of bear sign but no bears. Also lots of mountain lion sign too. They usually avoid people but two cyclists were fatally attacked in Washington state recently by a mountain lion so I stayed vigilant. According to the news story I read the cyclists saw the mountain lion stalking them, used rocks and swung their bikes around to scare it off. Then when they thought it was gone for good they were attacked. During the attack one cyclist started running away while the lion was attacking the other cyclist. The lion then chased the running cyclist and killed him. The other cyclist was badly mauled but managed to escape. Mountain lion attacks on humans are very rare but they can be every bit as deady as bears. Luckily at this point I was hiking with four other southbound hikers so the bearanoia was at a minimum.
After the Bob we entered the Scapegoat Wilderness. This stretch was hot, high, and dry ridgewalking between 8 and 9k feet.  But it gave us some spectacular views of the Montana mountain ranges. 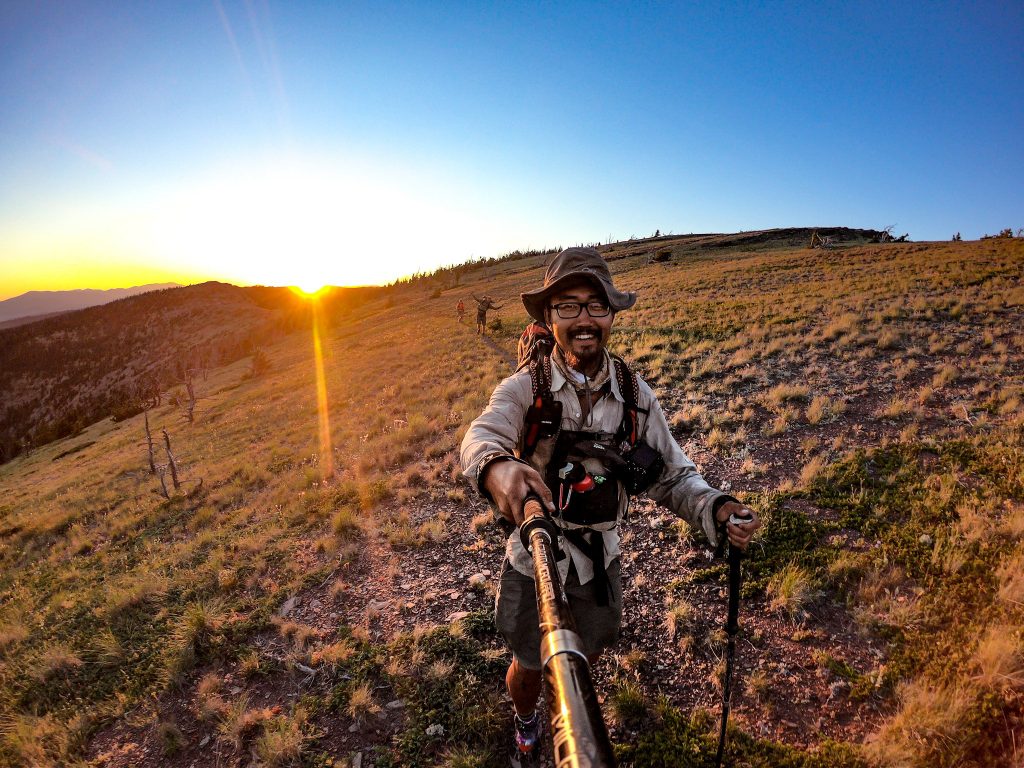 Ridgewalking in the Scapegoat wilderness.

After this we entered less wild areas in the Helena and butte areas. Lots of cattle, less bear signs, and a mix of forest service dirt roads and trail. Our mileage picked up here and we were able to consistently hike 25-30 miles a day. 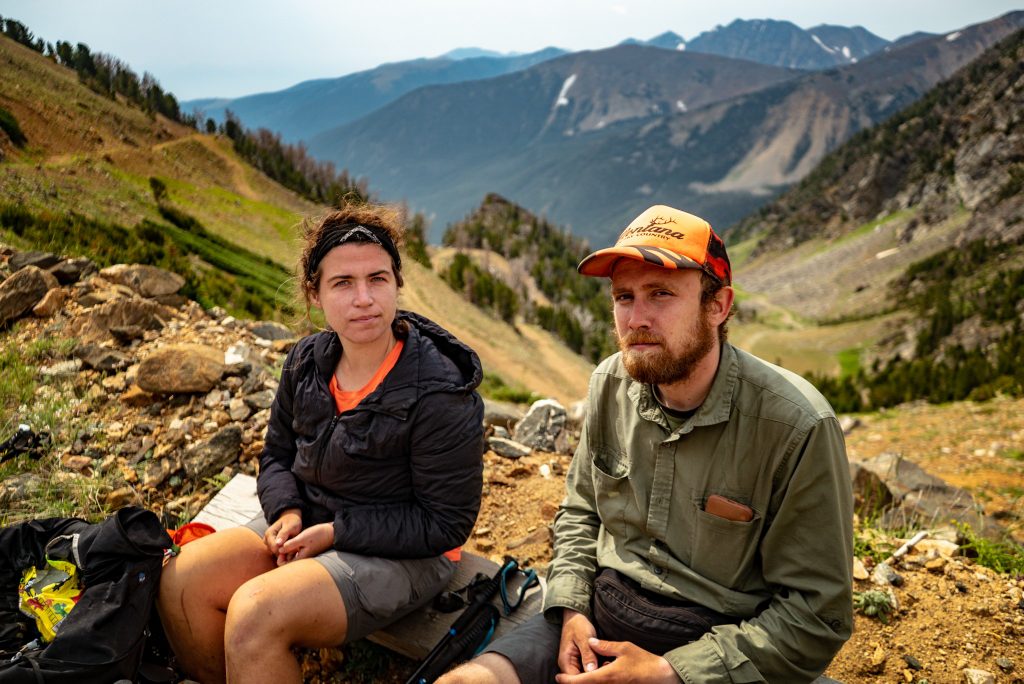 Tom Tom and B sitting ontop of a pass in the Tobacco Roots, part of the Big Sky Supercutoff.

After reaching Butte, Montana we headed southeast on the Big Sky Supercutoff. The CDT has dozens of alternate routes and very few people follow the official route for the entire trail. We opted for the Big Sky Supercutoff because it saves over 200 miles of walking along the Idaho Montana border and instead heads directly into Wyoming via north Yellowstone.
The cutoff has been the most rugged hiking yet because we had to cross over several mountain ranges. It felt like I was back in the Whites on the Appalachian trail. Up down up down up down. Relentlessly over loose rocky scree. But the views! Alpine lakes with mirror smooth surfaces. Vibrant wildflowers. Gorgeous flowing mountain streams. It was hard but absolutely worth it. I think the Lee Metcalf Wilderness rivals glacier for pristine nature and beauty. 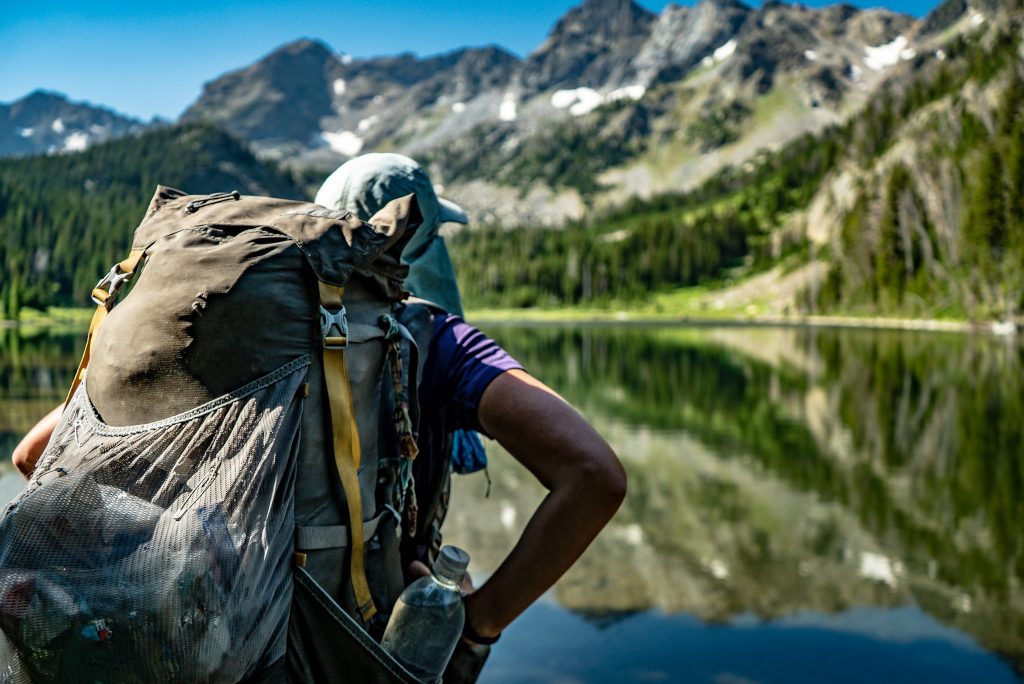 FlyBy, another southbounder stands in front of Mirror Lake in the Lee Metcalf Wilderness. 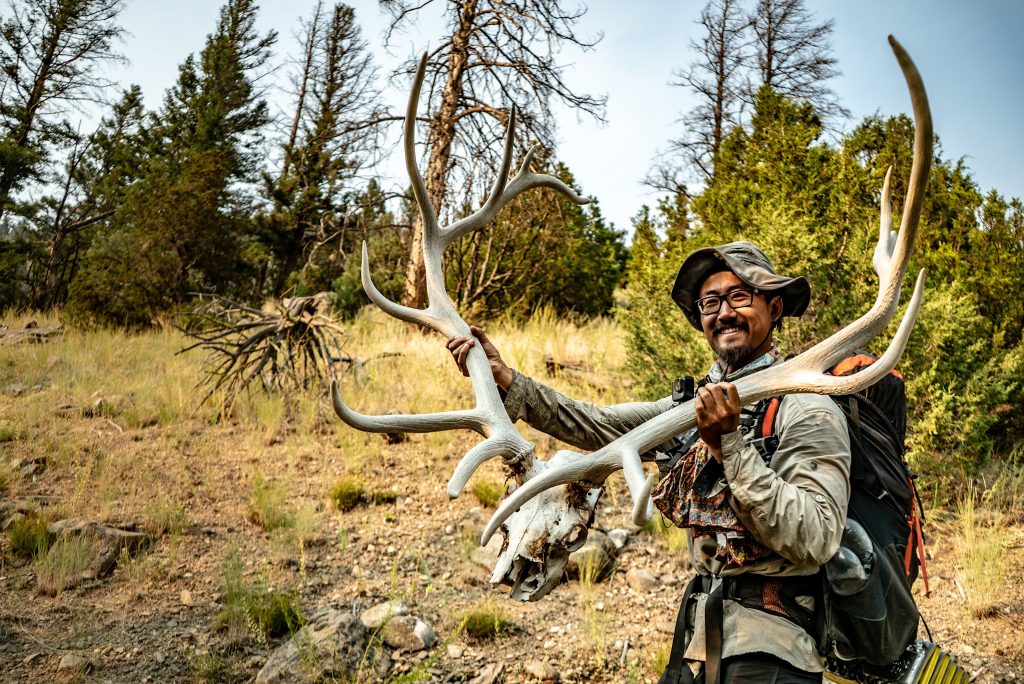 Lots of antlers and caracasses in YNP.

We entered into Yellowstone National Park via the Sky Rim trail. The trail straddles the ridge that divides YNP from the national forest to the north. This trail was BRUTALLY hard. Just like the AT it climbed to the top of every peak for no discernable reason and often the trail was straight up with no switchbacks. FlyBy, used to the gentler grades of the PCT started having achilles pains during this section and they have still not abated.

From the Sky Rim trail we dropped down into Yellowstone National Park proper and into the small village of Mammoth, WY. Mammoth was small but had everything we needed – a campground, a store with food, beer, and ice-cream, and a post-office.

I arrived in town at 5:30pm on a Friday minutes after the Post Office closed for the weekend. This meant that I’d need to hitch BACK to Mammoth on Monday in order to pick up a resupply box and a pair of shoes. What a pain. But the next day as we were walking past the post office to get back on trail I saw a mailman open the doors and walk outside with a box. I sprinted to him, explained my situation, and he was kind enough to give me my boxes! As always, the trail provides. 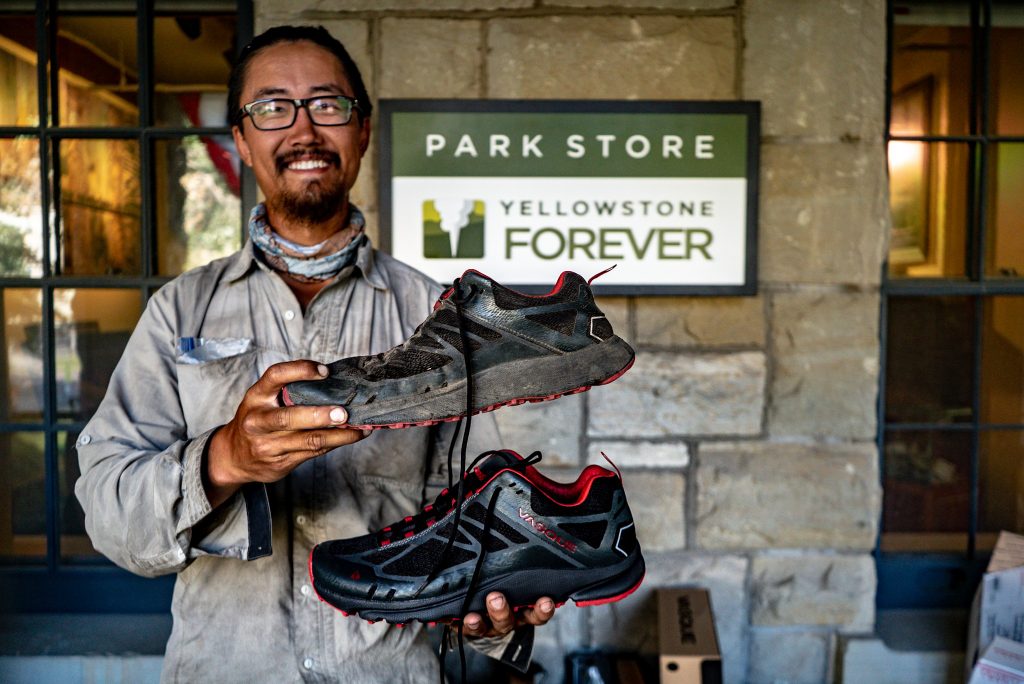 We hiked through very diverse country in Yellowstone. First through black canyon following the Yellowstone river, then down through the Yellowstone Grand Canyon where we saw spectacular water falls, across west around Mary Mountain which was a flat, hot, and boring section and finally south into the very active thermal area of Old Faithful. 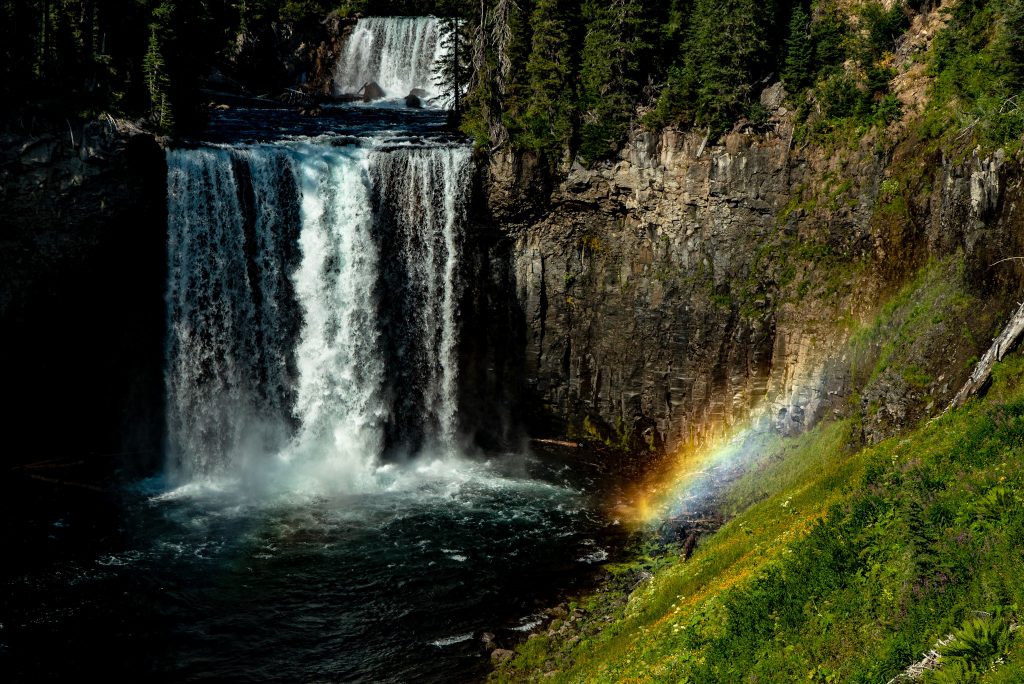 Old Faithful itself was super underwhelming. Throngs of tourists and really not a scenic geyser. However that night I was able to catch Lone Star Geyser in action just after the sun had set. This was much more spectacular, the water shot over 40ft high and plumes of steam rose into the night to a backdrop of a new moon and Mars. 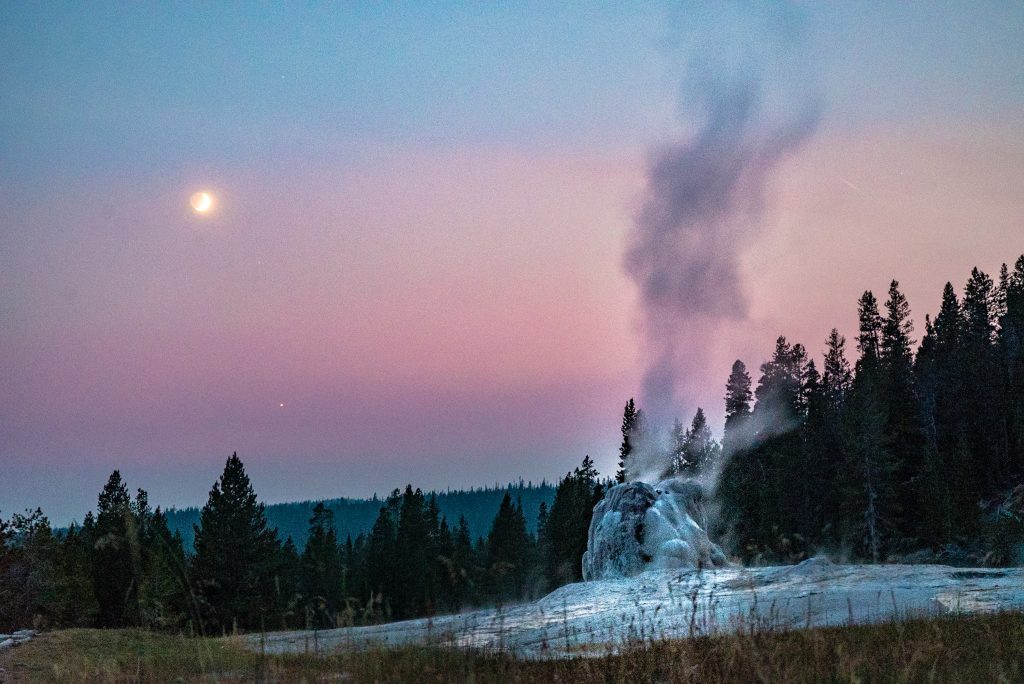 Unfortunately I hurt my ankle during this section. From Instagram:

Our last day in #Yellowstone I must have kicked a rock or a root really hard. I don’t remember when I did it but toward the middle of the day my ankle developed a pain that continued to build throughout the day. As best as I can figure I must have kicked something hard and hyperextended the tendon that connects my foot to the my shin muscle because that’s what hurts and is swollen.

Unfortunately on our route there was just NOTHING after Yellowstone until Jackson, WY, so I had to do three 30 mile days on the swollen ankle over the ridiculously rugged terrain of the #Tetons. I couldn’t have picked three worse days to be walking on an ankle injury as the trail in many places is just sideways or filled with irregular shaped rocks causing all sorts of ankle rolling movement. The two hour downhill climb of that cliff yesterday was especially bad for it as it forced the damaged tendon to extend in a way it really didn’t want to extend.

So I’ve been resting in Jackson. Yesterday I did two hitches, one with a mother and daughter from BC, Canada to Moose Junction and then to Jackson with two mountaineers climbing the Tetons. They were from Cali. It’s really cool how comfortable I am with just sticking out a thumb and hitching now. It used to give me a lot of anxiety on the AT. Now I’m confident I can get anywhere by hitching if needed. The growth is neat.

I’ll skip the last bit of the Teton Crest trail and hike outta here tomorrow with FlyBy @mikaelaosler then do a short day to a hotsprings the next day. It works out because I can rest while she finishes the Tetons and thus we won’t get separated. B took a different route through and is now a day ahead. That will be two days off and two short days so I’m hoping that will give it enough time to heal, at least to the point that I’m not damaging it more by hiking on it. 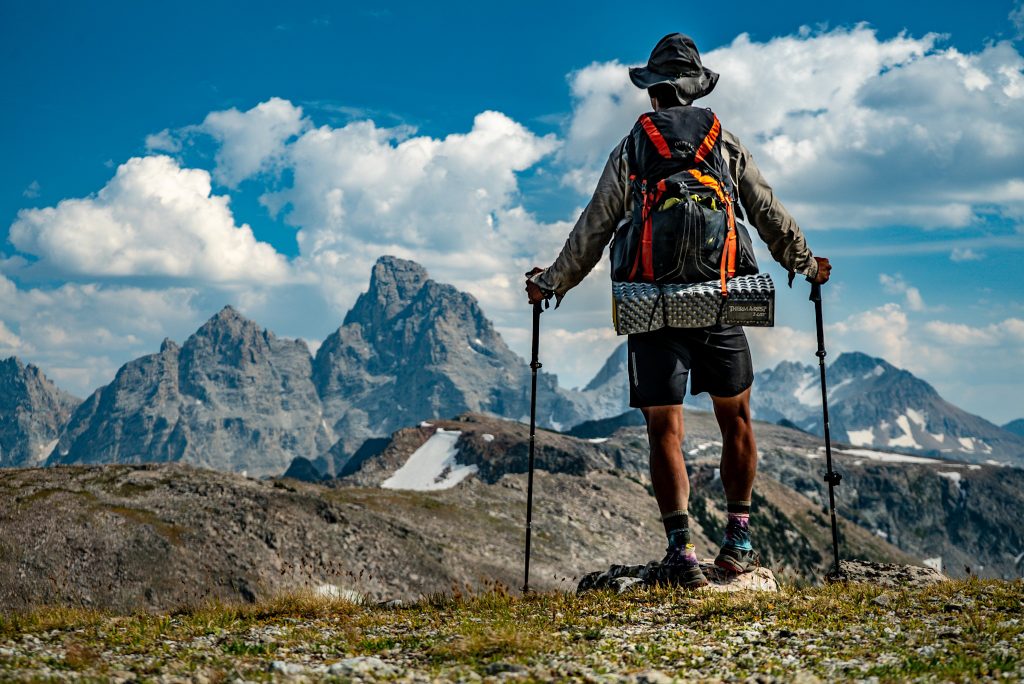 The Tetons are grand indeed.

The Tetons are hands down the most amazing mountains I’ve hiked in. Just spectacular. Like places in Utah these mountains simply look fake. As if they’re lifted from a painting or video game but they can’t possibly be real.

As always the photos simply cannot capture the experience of being 10,000ft high and walking through these mountains. Hiking through the Tetons will be an experience that I treasure for the rest of my life. Here’s another excerpt from Instagram: 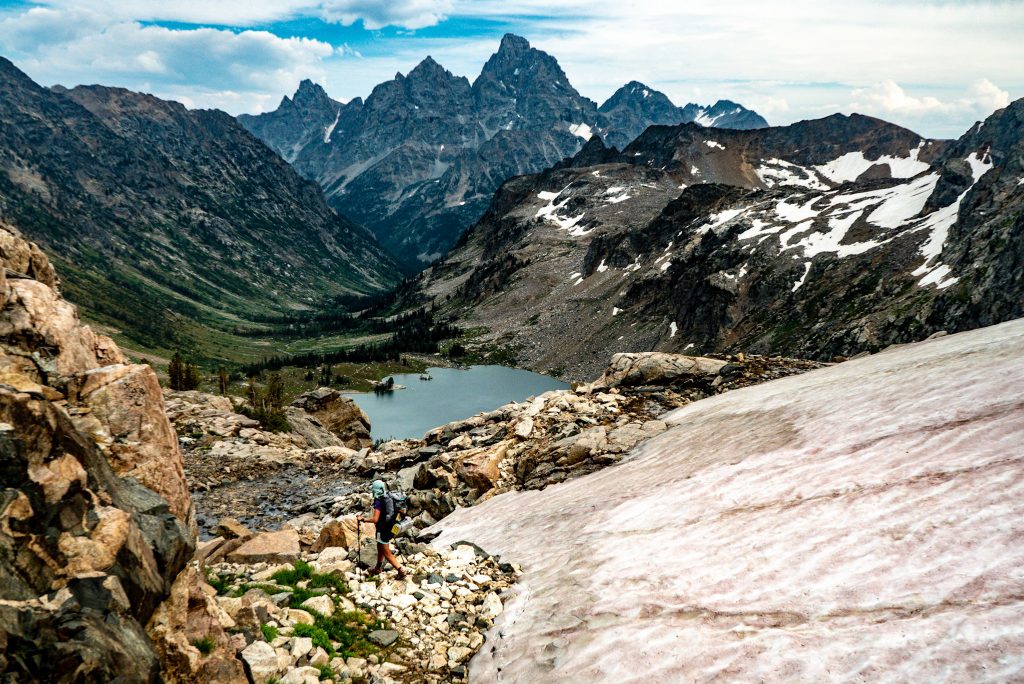 We had to climb down to that lake cross-country. No trail whatsoever.

Breaking chronology to share this pic from the #teton crest trail yesterday.
Our path took us up and over a pass at 10,400 ft, cross county and then down 1,400ft on what was essentially a moderately steep cliff face. It was the most difficult hiking of the #CDT by far and possibly beats southern Maine for pure unadulterated meanness.

It took us almost 4 hours to cover just ~3 miles of ground. At the top of the pass we climbed over a big jumble of boulders while sheer dropoffs of 500-1000 ft loomed directly to our left.

Descending from 10,400 to 9,035 to solitude lake was super sketchy. Most of that descent was made on our butts in a crab walk. There were also a few sections that required actual downclimbing and at one point I had to traverse 10ft to leave a stream bed that had gotten too wet and slick. That traverse was heart stopping. I was right on the edge of losing my center of gravity and simply falling down the mountain. A fall probably wouldn’t have killed me but it would have been 50-100ft of being banged up on sharp rocks before crashing to a stop on more sharp rocks.

In the end FlyBy and I made it to the lake safely at 6pm then flew down another 9 miles to reach a campsite around 1030. In total we did 30.3 miles and hiked for 15.5 hours nonstop. 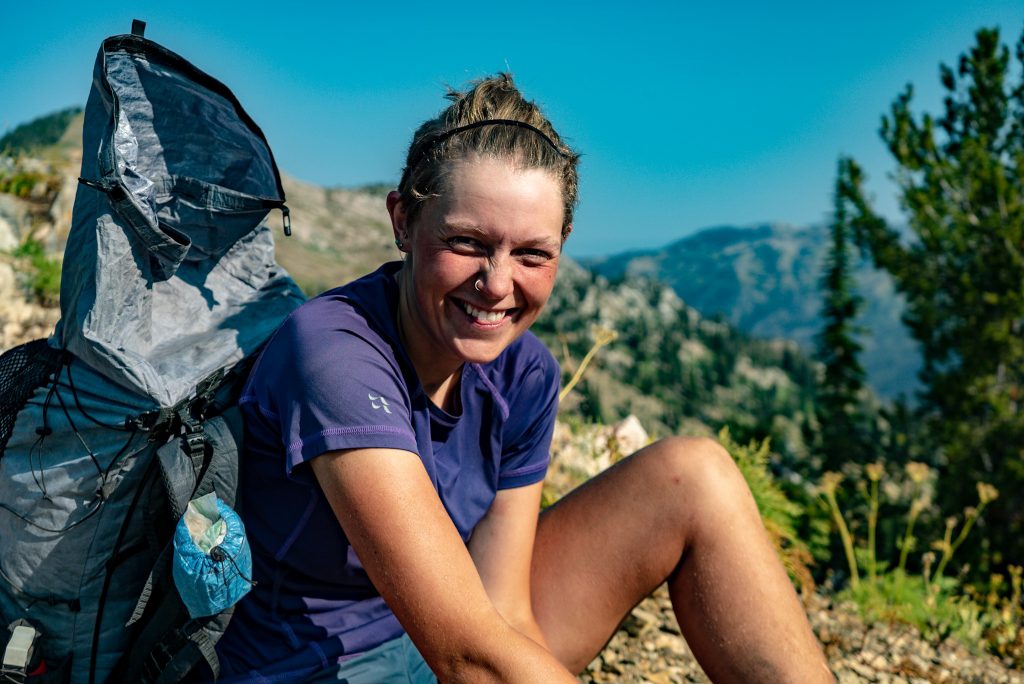 FlyBy in the Tetons. It’s just us two now as B took a different route and is a day ahead.

So now we’re more or less caught up! The next step is to hike through a wilderness area to get back on the official CDT then go south through the Winds, finish up Wyoming, go through the San Juans in Colorado, then blaze through New Mexico and finish this second long trail!

Thanks for reading. As always I love to hear feedback and comments from you. Especially on the videos, anything you’d like to see more of, less of, what’s interesting, what’s not, thanks again!!